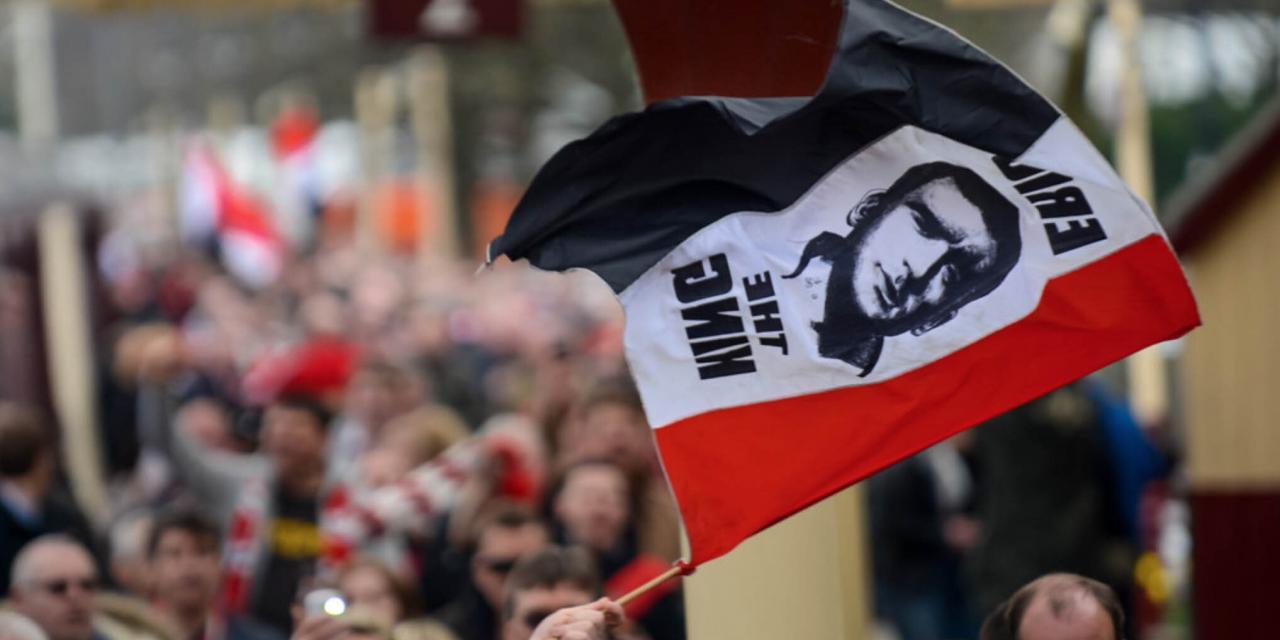 And our quiet little town goes about its normal business with the weekly market setting up – it is Saturday after all and with it being Easter, it is expected to be a little busier.

But this day, in Ramsbottom, was not going to be a normal day. For, down at the Harry Williams Riverside Stadium, the struggling Ramsbottom United would welcome near neighbours FC United of Manchester, although they had ended their ground share arrangement with Bury FC ahead of their move to their new home in Moston.

Of course, with it comes their hoards of supporters!

From lunchtime onwards, the town started to get busier with swathes of red, white and black scarves, shirts and hats. Flags started to appear all over the town and the noise of away supporters started to throng the streets.

And then, at about 14:00, the ‘Rammy Rattler’ steamed into Ramsbottom Station with flags and scarves waving out of the windows as the train pulled in past the ground.

It was the second time that fans of FC United had commandeered the East Lancashire Railway train – they had done so in 2007 for their first ever league game with the Rams – and decided to do it again eight years later.

As you can imagine, it was quite some sight as over 400 fans of the ‘Red Rebels’ poured off the 13:35 service from Bury and down towards the ground or across the road into the awaiting, already very busy, pubs.

The Harry Williams Riverside Stadium had never seen anything like it. While 1,653 spectators came to the game in 2007, another Easter Saturday game which was the first time the ground had seen four figures, the 2015 repeat would break all of those records.

FC United must have contributed at least 70% of the record 2,104 crowd and, being so close to promotion as they were, it was perhaps to be expected that the red hordes would descend with no little swagger, especially against the beleaguered, relegation threatened Rams.

The match itself was a fairly routine win for the visitors, who moved just three points away from promotion out of the Evo-Stik Northern Premier Division.

And below is the match report from the old Ramsbottom United website …..

Apart from a brilliantly understated performance from Callum Byrne, there was little to delight in a tepid and sometimes tedious stop start match not helped by some over fussy refereeing.

None of which detracts from their performance on the pitch and a well earned promotion. It is not to damn Byrne with faint praise to say he is only capable of doing the simple thing. The ability he has to find space time and awareness to do it – and do it quickly accurately and effectively – marks him out as an exceptional performer at this level. The fact that the Rams disdained to try to man mark him or even get anyone close to him helped of course – but he did not need any invitation to shuffle back and forth along the half way line barely needing to make a tackle, almost constantly in possession and finding teammates with neat progressive passes.

For the first 30 minutes or so, aided by the slow pace of the game, the Rams rather held their own and could have taken the lead after 10 minutes when David Kuba-Kuba’s shot was turned wide after a strong run from the half way line got him into the box. But once FCUM took the lead on the half hour from the penalty spot after Shelton Payne found a defending leg to fall over the game was all but over as a contest.

The Rams, as is their norm, battled away and Mark Ayres and George Bowyer where resolute at the back. But as a team the Rams are vertically challenged and hence constantly susceptible to the dead ball.

It was from that route that FCUM scored the second goal that put any doubt in the final outcome firmly to rest. Rory Fallon found it all to easy to spin of his marker at the far post and head in a teasing out-swinging corner from almost under the bar. A neat, well worked goal.

While they were well beaten on the day the Rams were far from disgraced. The resilience they showed in the face of a very good team marks the progress they are making. With results going their way and a healthy goal difference compared with those around them another, three or four points from the last 8 matches should see them comfortably safe.

Sadly, the game and the occasions for some Ramsbottom United supporters was spoilt as the match report concludes …. it was a great disappointment though that a very small minority of their supporters rather spoilt what could and should have been a festive Easter atmosphere by indulging in abusive foul mouthed vitriol and venom against the home team and its supporters. It was a throw back to the dark ages of professional football which drove so may supporters to this level of football. It would be wrong to castigate the majority for the failings of the few but there is a great danger of FC United of Manchester becoming no better than they ought to be, mini-me clones of the club they abandoned for some thing new cleaner and fresher – which would be great shame.

It was a day that very few will forget. It is a day that the town will not forget either and certainly the local pub and shop owners.

For the Rams, relegation was still a serious threat. A 4-3 win at Barwell a few weeks later would ensure they lived to see another season in this league.

But this would be the last time that the Rams would tackle FC United – as it stands.

VIDEO OF THE GAME
https://www.youtube.com/watch?v=SW8ZVtEaGzU