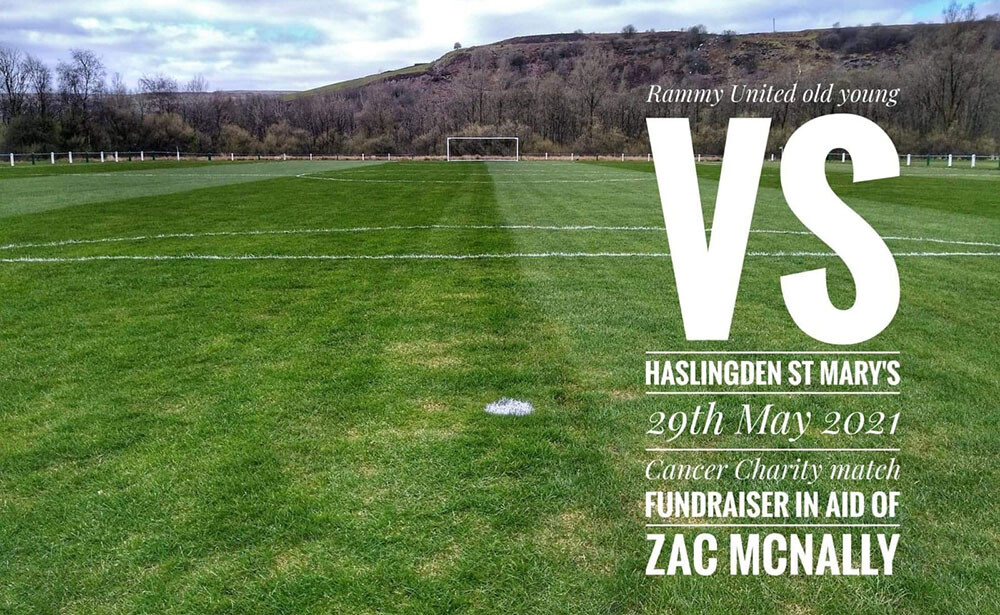 A host of the great and good of Ramsbottom United’s past will be tying up their boot laces one more time this coming Saturday for a Charity match in aid of young Zac McNally, who is suffering from leukemia.

The match will pit a Rammy United Old and Young team against Haslingden St. Mary’s at South Shore Street in Haslingden (BB4 5DX) at 2pm on Saturday and promises to be quite some occasion.

The Rammy side can boast over 600 appearances for the club and in excess of 100 goals but will also be able to show off some of the bright young Academy talent trying to outdo their dads in some cases!

That honour of outdoing their father isn’t just going to be bestowed upon the Academy youngsters but will also be the case for Martin (better known as Tommy) Hulme and his son Jordan, who will be playing on the same team together for the first time.

“Yes, Saturday will be the first time,” laughed Jordan. “Let’s see how many bollockings he gets! I’ve just told him to hit feet!!!

“But, honestly, it should be good. I used to watch him and some of the lads play when I was about four and used to sit in the changing room with them all.

“Our back four is about 206 years old combined so we need to keep the ball up the other end I think!!!”

The Rammy line-up features some of the very best in their day, including John Blackley who played in 254 games for the Rams from 2004 to 2010 and goalkeeper Martin Campbell, a stalwart of 94 appearances across five seasons.

Tommy and John will be joined in defence by NPL 2014 Play-off winning goalscorer Steve Howson while organisers Paul Ryder and Chris Standring will make up the veteran back line.

Mark Stewart, who slotted three goals in this time with the Rams will also feature and they will have the youthful exuberance of Sam Ryder, Will Preston, Charlie Marshall, Olly and Louis Standring and Joe and George Hall to help bail the oldies out!

“I am really looking forward to it,” added John Blackley. “We have been playing a bit of five-a-side with some of the older lads who used to play at Rammy over the last few weeks.

“I hadn’t touched a football for a couple of years before that and it got me enjoying it again.

“It will be nice to see a few old faces and I have been told that Harry Williams will be taking the team talk so it should be worth it just for that!!!.

“And my cousin, Reece Goodchild, is playing for Haslingden so I have told him to bring some decent shin pads and I have sharpened the studs on my boots especially for him.”
John didn’t have 38 yellow cards and three reds for nothing, you know!

Whilst it will be a great occasion to see these legends of days gone by, it is all about the match itself and raising money for this worthwhile cause.

Zac is the son of former Rammy player Ian McNally – who will be participating in the game too and played for the club in the Manchester League and early North West Counties League days.

And he will certainly be putting in a shift to help his son, who needs funds to further support his recovery so this game has been resurrected once more to support him.

“The game was originally organised by my dad, Kevin, as a charity match played on Boxing Day as a fundraiser for a young lad that died on the pitch in Ramsbottom of a heart attack,” said organiser Paul Ryder – another to have donned the blue and white in the 1980s.

“He was only in his 20s and had a young family. This was way back in 1977 and the game was meant to be a bit of a one off but something similar happened in Haslingden the following season and the game was played again and this became a tradition and was played every Boxing Day for at least 25 years.

“It kind of fizzled out until my dad passed away in 2002 and it was resurrected again as a tribute, being played for again over the next few seasons.

“We used to get to play the game at the Riverside. Harry, as always, provided the kit and the balls – with a bit of persuasion.

“I think it was the only time he ever let anyone on. In fact, one year he turned down Queen’s Park Rangers, who were playing in the League Cup against Bury and wanted to use it as a training ground as they were staying up at the Old Mill Hotel the day before the game but Harry wasn’t letting them on! We were quite honoured to be allowed!

John Blackley added, “The most important part for me is what the whole day is about which is raising some money for Zac, who has been really unwell and is hopefully on the road to recovery now so, if by playing a bit of football can help him with that, then I will be happy!”

So please do come along and support Zac. Tickets are not necessary, just turn up and enjoy the game – the bar and beer garden will be open throughout to make it a day to remember and to give some much needed funds to his excellent cause.