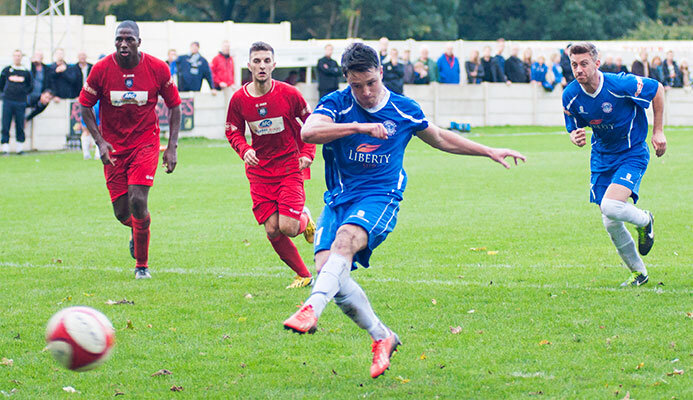 Very few will forget the one and only time that we have met Worksop Town. It is on the same equivalent Saturday in October 2013 in the first qualifying round of the FA Trophy. Rammy winger Phil Dean described this match in his “Looking Back” article on this website as his favourite. “The game started off at a million miles an hour and we didn’t have a kick. But we were 3-0 up before ten minutes. It was mad!” he reminisces.

So, here is Tony Cunningham’s full match report from the game, covering just how crazy the encounter actually was. Enjoy!

Worksop Town arrived at the Harry Williams Riverside Stadium for the first ever meeting of the two clubs, but departed not knowing what had hit them.

The Rams simply blew their more illustrious opponents apart with a brand of scintillating football that thrilled the appreciative large crowd.

The home side raced into an unassailable three goal lead in the first seven minutes, as the visitors were pushed onto the back foot, where they stayed for most of the ninety minutes.

After just three minutes, Jon Robinson out-paced his marker down the left before firing in a low cross which Tom Brooks neatly tucked away, to give the Rams an early advantage.

They could not have envisaged that within a further four minutes they would have trebled that lead.

Barely had the excitement calmed down, when Dominic Smalley won the chase for a loose ball in the area, and he calmed beat the disbelieving Gathercole to put the home side in dreamland.

Credit to the visitors, despite the score-line, they showed they were up for a fight, and on 21 minutes managed to reduce the arrears. A two-on-two break saw Jack Muldoon race down the left-wing before sending over a perfect cross for Leon Mettam to convert at the far post.

Brooks headed a Smalley cross over as the home side continued to attack, whilst at the other end, a dangerous through ball saw Mettam round Grant Shenton in the home goal, only to be denied by some frantic defence.

Brooks then saw his angled effort cleared off the line only for Owen Roberts to fire in a superb effort that sailed inches wide of the far post.

On 28 minutes, as the Rams took a quick free-kick, Robinson went down near the referee, who immediately produced a red card for Town defender Laurence Gaughan.

Ten-men Worksop came close to reducing the arrears just after that when a Phil Roe free-kick came back having crashed against the bar, and Danny Warrender, in attempting to clear the danger, came within a whisker of putting the ball into his own net.

The ball then broke to Dean, who raced goal-wards to be frustrated by Gathercole who tipped his fierce drive over the bar.

A Warrender cross ricocheted off Billy Priestley and sailed wide before the home side re-instated the three goal advantage.

On 35 minutes Roberts crossed to the far side of the box for Smalley to nod the ball back in. Robinson was in the process of controlling it as he was up-ended by Patrece Liburd.

Dean took the penalty, and although it was initially saved, he raced in to plant the rebound firmly home to give the home side a 4-1 advantage.

As the second half began, Roberts was in the thick of the action.

He first sent in a tantalising cross which just evaded the on-rushing Robinson, then he raced into the box before unleashing a shot that sailed just wide of the post.

Then, on 52 minutes he played in a perfect through ball for Brooks, who calmly side-stepped the keeper before sliding it into an empty net. 5-1.

A Warrender through ball next found Brooks, but as he attempted to loft it over the keeper, it flew harmlessly wide.

The one-way traffic continued, as Worksop finally accepted their fate.

A Grant Spencer free-kick came back off the post, before another dangerous cross from Roberts found Robinson, but his header went straight to the keeper.

Brooks went close to claiming his hat-trick as he hit the post before being part of a double substitution.

Worksop then had a glorious chance to add to their score.

In a rare attack, Conor Higginson found himself in acres of space on the left, but with only Shenton to beat, he screwed his effort wide.

On 74 minutes, Smalley’s fine run into the area was stopped illegally, and up stepped Dean to net from yet another spot kick to make it 6-1.

Two minutes later he could have notched the seventh, but he was just off target from 20 yards.

Substitute Jordan Hulme then went racing into the left hand side of the box only to see his goal-bound shot blocked, before the home side conceded a penalty themselves two minutes from time. Warrender’s slight trip on Higginson as he was racing across the edge of the penalty area, gave Muldoon the opportunity to net a consolation, which he did.

Not to be outdone, the Rams came back to notch the final goal of the game themselves.

In injury time, the over-worked Gathercole parried from Tommy Toth, but Hulme was on hand to pounce and knock in yet another for the rampant home side.

This was a five-star performance, showing the Ramsbootom United side at it’s very best. Great work ethic, and excellent passing movements, that had the opposition chasing shadows for most of the afternoon.

The 7-2 score-line in no way flattered them.