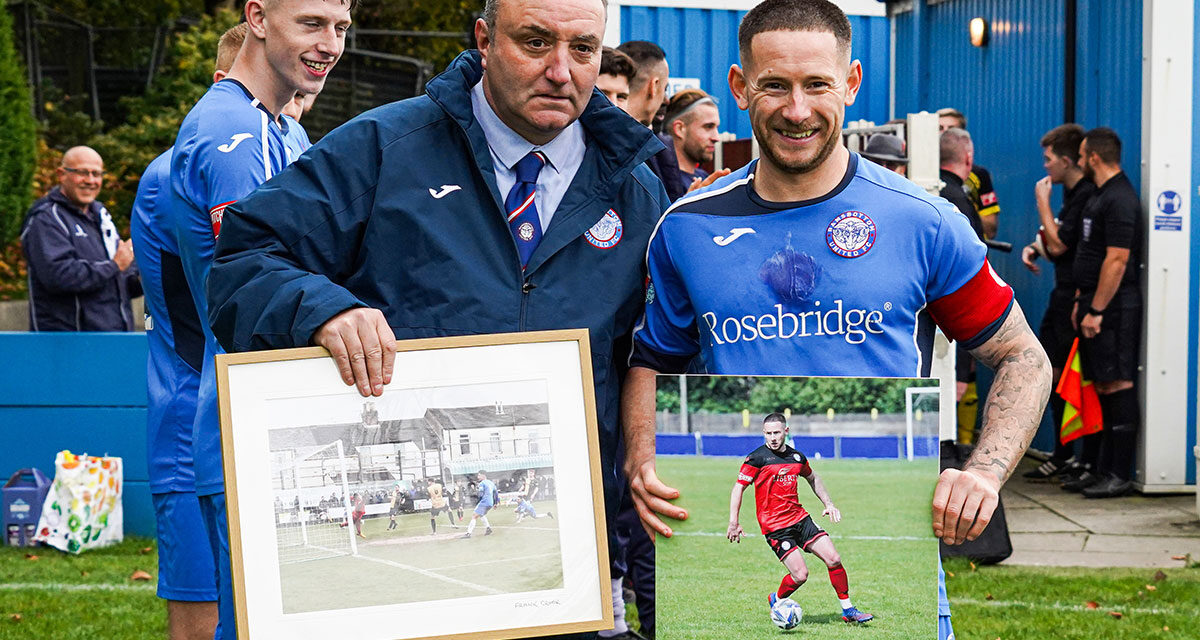 He has been a part of the club for eight seasons. He has enjoyed some sensational highs and some shattering lows, but Jamie Rother has etched his name firmly on the list of Ramsbottom United ‘legends’.

And he was honoured, before kick-off on Saturday against Newcastle Town, with a framed picture to depict his 150th appearance for the club, which came a couple of weeks previously in the FA Trophy at Pickering Town.

Jamie, who joined the club from Salford City when most of the Ramsbottom United side had gone the other way in early 2015, has become not only a firm favourite at the Harry Williams Riverside Stadium but the first name on the team sheet.

With loyalty in non-league football often a rare commodity, Jamie has bucked that trend in fine style.

“I feel like part of the furniture,” he admitted before jetting off on holiday with there being no game for the Rams next week. “I hate missing games, but I know I could have played over 200 games for the club had it not been for injuries.”

Those injuries caused him to miss some eighteen months of action as first his knee and then an Achilles saw him sitting on the sidelines, not a place he enjoyed being.

For many, that would have been that with a long road back to fitness, but he battled hard and “got myself back fit under Mark Fell and got back to playing again.”

“I love this club, it is a great club, it is local to me, and I have always said that the reason that I have stuck around is that enjoying being a part of it, having a beer with the lads and the supporters, especially when we have been doing well.

“I have had a few offers to go play elsewhere – it’s a regular thing in non-league football – but I am not the type to go swapping around just for a few extra quid.

“I suppose I am quite old school in that but when I joined the club, we were faced with rebuilding the team and I have become really settled here and I enjoy playing with my mates and playing for our great supporters.”

It certainly would have been easy for Jamie to have left in the early days of his Ramsbottom United career, given he only tasted success in two of his first 23 starting appearances – wins at Stourbridge and Grantham Town.

But, after suffering the injury at Barwell in October 2015, he faced a long road back but the support he received from the club kept him firmly involved and in April 2017, he returned in the game against Goole after making a short 35-minute comeback a year earlier at Marine.

It was a very tough period for Jamie, but his hard work and sacrifice paid off and he has enjoyed some of Rammy’s most memorable recent times, including the epic FA Trophy run to Weymouth and beyond and famously coming off the bench to score the 88th minute winner at Marine in what was to prove to be our final game before Covid took its hold.

You can read all about that goal and what happened afterwards here.. an article which appeared originally on the Ramsbottom365 website:

“I know I could have played a lot more but for the injuries and Covid hitting, but I love doing well for Rammy, I enjoy the support we get and everything about Rammy,” he added.

He has 14 goals, including the opener in our 4-0 win over Newcastle Town on Saturday – his first for the club since ‘that’ memorable strike at Marine before lockdown.

Jamie Rother is a bonafide Ramsbottom United legend and the plaudits he received on reaching 150 games were very much deserved.

Congratulations Jamie… here’s to the next 150 and beyond!