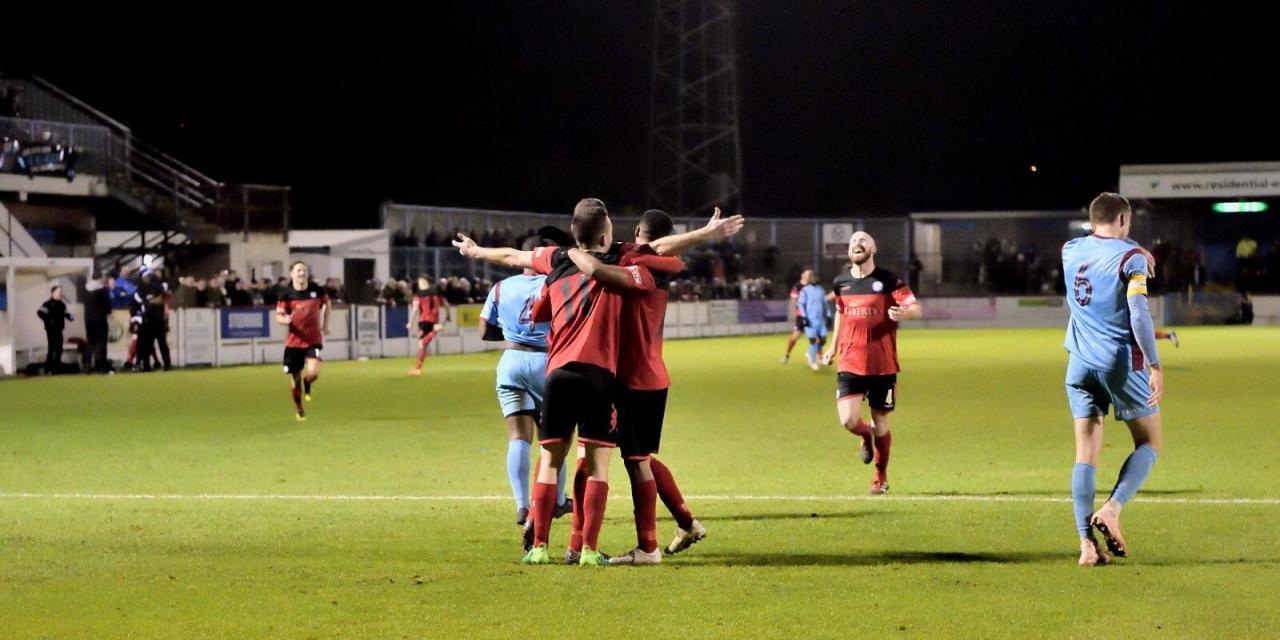 The fourth replay in a row. But this one will live on and on forever more in the annuls of Ramsbottom United history.

Two years ago to the very day – Tuesday 15th January 2019 – we made the lengthy journey to the South Coast to take on Weymouth in the FA Trophy second round replay.

Here is the match report that Richard Isaacs’ wrote on that incredible day…..

Ramsbottom United booked their place in the third round of the Buildbase FA Trophy with a sensational 3-1 victory over Southern League Premier promotion chasers Weymouth on a memorable night in Dorset.

Faced with a 550-mile round journey on a Tuesday night, Chris Willcock’s men produced the performance of the season to shock their hosts.

The visitors made just one change to the starting XI that played on Saturday – the impressive Iyrwah Gooden replacing the unavailable Simon Woodford.

And it was the youngster who showed the Rams meant business within the first minute when he sprinted down the right to force a good save from the Weymouth keeper Thomas. Gooden was again to the fore shortly afterward as his shot was blocked and Eddie Moran’s fierce drive following up was straight at the keeper.

Rammy were very much in the ascendancy in the early stages but could have fallen behind when the returning Ben Thomson shot over when one-on-one with Sam Ashton when it was easier to find the net.

It was end to end stuff but the Rams were resolute in defence and Weymouth always looked dangerous coming forward.

The deadlock was broken just past the half hour mark when Tom Kennedy’s excellent cross deep in Weymouth territory saw Terras’ defender Sam Sherring head past his own keeper.

Parity was restored just two minutes later when Thomson was the beneficiary of some indifferent defending and, with Ashton sprinting out of his goal, Odubade’s cross found the forward to head into an empty net.

The Rams had two more excellent chances before the half was completed.

Gooden was released through the middle of the park and beat two defenders but saw his shot rebound off the post and the follow up sailed over and the Rams came again to force a point blank save from Thomas.

Whilst Weymouth started the second half strongly but it was the Rams who took the lead again after 54 minutes.

Once again, it was an error from the keeper that caused the goal. Thomas came out to a loose ball and Eddie Moran got the better of the bounce and lobbed the ball into the empty net to give the visitors a 2-1 lead.

The home side continued to press with the highly dangerous Odubade cutting in from the right and bringing out a fine save from Ashton in the Rammy goal.

With the home crowd becoming restless, they were more so when Odubade, who was voted the home side man of the match, was substituted after 65 minutes.

And they were starting to head for the exits after 79 minutes, when Jason Carey made the Terras pay for their defensive frailties and shot under the advancing keeper to make it 3-1 to the visitors and set off wild scenes of celebration.

The Rams even missed a penalty in second half injury time when Gooden was upended in the box but skipper Tom Kennedy’s shot sailed wide into the stands.

Time finally whittled down as the Rams defended two Weymouth corners and the final whistle saw incredible scenes as the lowest ranked team left in the tournament made the last 16 and a home date with National League outfit AFC Fylde on February 2.

What a night for Ramsbottom United!