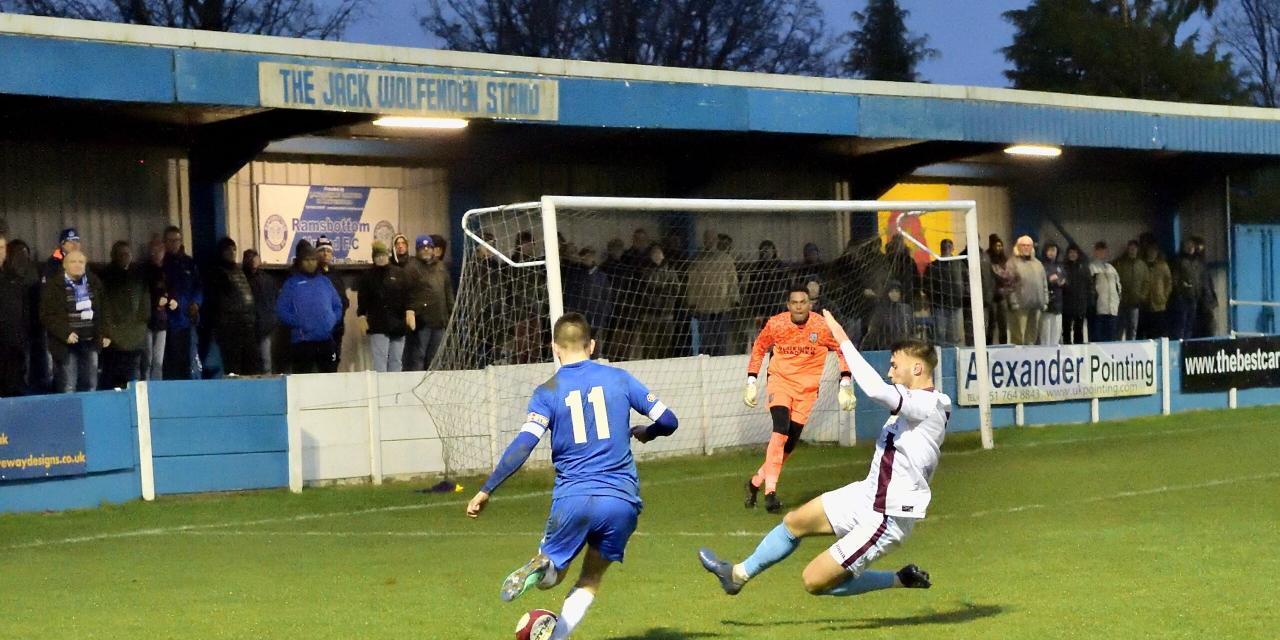 The Rams had never progressed this far in the FA Trophy before. It was uncharted territory as were the opposition, Southern League Premier promotion chasers, Weymouth from deep on the south coast in Dorset.

But 457 spectators came to the Harry Williams Riverside Stadium on this bright Saturday afternoon to see if the Rams could continue this incredible, unprecedented run which had seen them negotiate five rounds of which the last three had gone to replays.

And they were not to be disappointed either with nail-biting tension and a grandstand finish.

The early play was all Ramsbottom as Jacobs clipped his header wide from Nic Evangelinos’ cross before Woodford didn’t quite connect with the ball from a well directed corner which found him in space.

However, despite the Rams’ early dominance, it was the Terras who opened the scoring on 37 minutes. A foul conceded by Luke Thompson presented the visitors with a rare attempt on goal which they turned in courtesy of their midfielder and captain Jake McCarthy, who met the cross by the impressive play maker Brandon Goodship (who is now playing league football with Southend United) to give them the interval lead, which they would certainly have been relieved about.

On the restart for the second half, it was again dominated by the home side although Sam Ashton did have to pull off a great save when Calvin Brooks shot from a tight angle before making another fine stop to deny Goodship. Evangelinos was often proving a threat for the Rams but he was unable to find a way past Lloyd Thomas in the Weymouth net.

That was until the 68th minute when the prolific Evangelinos levelled the scored. From a clever corner routine from skipper Tom Kennedy, the winger turned the ball home to send the home supporters into raptures.

With just 20 minutes left to play, it was looking like the Rams would be drawn into yet another replay and the play in that final quarter of the game left all those watching with very few finger nails.

In a thrill-a-minute closing, Eddie Moran beat the offside trap but couldn’t quite get around the keeper but, immediately, Weymouth stormed to the other end and front man Calvin Brooks tucked the ball past Ashton to restore their lead with only seven minutes left.

Roared on by the Rammy faithful, Chris Willcock’s side did not throw in the towel. Wave after wave of pressure came, initially from Thompson before, in the dying seconds of injury time, on-loan Mansfield Town striker Iyrwah Gooden, who had come on as a half-time substitute, converted Kennedy’s cross into the crowded penalty area to bring the scores level in the 95th minute… and the final whistle!

The manager was extremely proud of his sides efforts, yet was wary of the fact Ramsbottom could have won it with the chances created. “I’ve got the upmost admiration for the lads. They’ve given everything today and we live to fight another day, just. I have had some dramatic moments in my managerial career and this is another one.
“We’ve trained Tuesday and Thursday this week and for large periods the lads have implemented our game plan well”.

The replay on the coming Tuesday at Weymouth may cause a few problems regarding travel and work arrangements because after all, non-league players are not full time professionals, Ramsbottom United included.

On this issue Willcock remarked. “I think all the management team will be able to supplement the bench, he chuckled with a wry smile on his face. “We’re more than looking forward to going back to Weymouth.

“Going there can only inspire you from a playing prospective.

“There are some big teams left in the draw at the moment but we will see what Tuesday brings. These last four games for Rammy have been huge and the fans have been tremendous every time”.