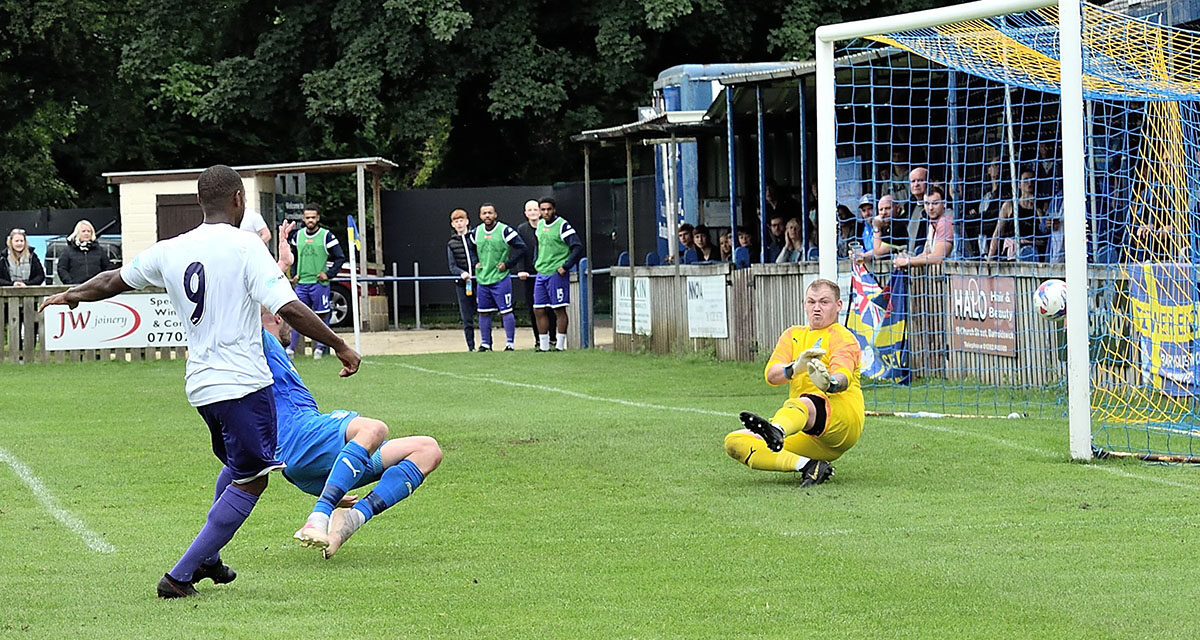 Diego Donafee sounded serious in his pre-match interview on the Ramsbottom365 site – this wasn’t just a cup fixture anymore, it was a game that we simply had to win. All the right noises then, whetting the appetite for this Saturday afternoon expedition to the outer reaches of Pendle.

The starting lineup was undeniably strong and seemed to back up the gaffer’s words, with only Ollie Martin, Godwin Abadaki and the two injured Jamie’s (Rother and Rainford) from the midweek league game missing out. Tom Stewart, Jake Thompson, Danny O’Brien and Joel Earps all coming in. Hardly what I could call under strength.

We started brightly enough, Jake Thompson causing all sorts of problems for the left side of Barlick’s defence, in particular. Jinking inside or outside of his man, he seemed to have the beating of his marker each time, but we just couldn’t get a meaningful connection as the crosses rained into the box.

Thankfully the sky didn’t rain down on us as heavily, despite looking greyer than an elderly elephant wearing sweatpants. A meagre bit of drizzle was all we really got.

After 11 minutes, Barnoldswick took the lead – Paul Turner slotting through Tom Stewart’s legs. Almost immediately, we sought the reply, and Joel Earps came incredibly close with a curler from outside the box which rattled the crossbar. It deserved more than it got.

Another three minutes later and Turner had his second, 2-0. Pouncing as a free kick was headed out right into his path. Bugger!

From that point onwards, the home side could have had more. But a flicker of promise to cling onto for the second half appeared as if by magic as Domaine Rouse smashed in a decent solo effort from close range after holding off a defender and gliding into the box. A half time pint and a ponder then, for many.

The second half resumed in mostly the same manner, Barnoldswick looking hungry for more but Ramsbottom not exactly playing poorly. Somehow after 49 minutes it became 3-1 to the hosts, a Paul Turner hat trick. This wasn’t going to plan at all.

Shortly afterwards, Rouse pulled it out of the bag again, a mightiful overhead kick which caught more than a few in the ground off guard. “That’s it now, you know they’ll go on and win it after that,” I heard from a few of the home crowd. It did seem that way, but yet again not for very blooming long.

Two minutes later and it was 4-2. Another ten and it was 5, both goals from Gareth Hill. Rammy heads were left smarting, and wondering how much worse could this possibly get!

The answer is that this game simply wasn’t over. Shortly after the fifth for the hosts, Richie Baker popped up to tap-in a low cross from close range, and Eddie Cooper added a fourth for the Rams as he blasted into the top corner from the edge of the box – this was just after hitting a powerful shot from distance that the home keeper parried away to safety, even though it had looked destined for goal.

The subs Osi-Efa, Jarrett and new signing Ethan Beckford all played their part, as Rammy’s attacks continued to build (Beckford looks quite handy by the way). But we just couldn’t find that equaliser. Most frustrating, but a hugely entertaining game.

On this evidence, Donafee and his team have an enormous amount of work to do. We have the talent, but the basics of being able to keep the ball out of the back of the net have sadly escaped us.

Let’s hope that a one-off freak result was all it was, and we can pick things back up at Kendal on Tuesday night.