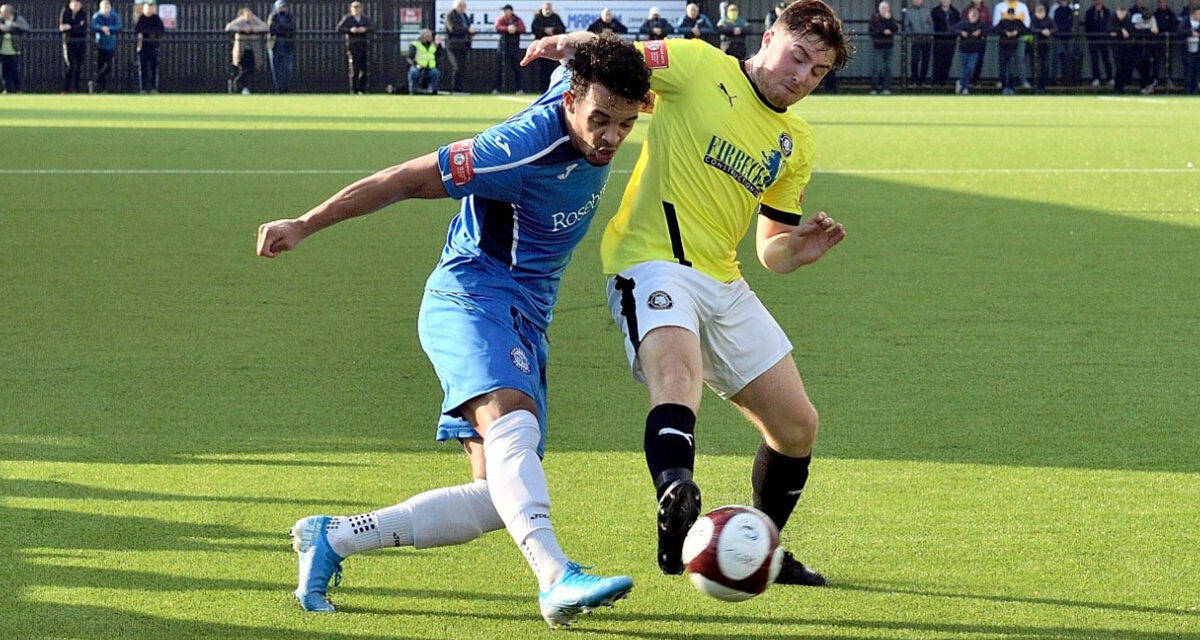 Saturday’s FA Trophy game with Worksop Town was yet another that will live long in the memory of all Rammy supporters. Coming from 3-0 down after just 22 minutes, the Rams produced a stunning rearguard to hold a 4-3 lead with just three minutes remaining. However, the Tigers’ substitute Scott Brown scored their equaliser and, unlike previous years, took the game to a penalty shoot-out.

It was a shame that we were not able to drag them back to the HWRS for a replay on Tuesday night, as we had sampled on many an occasion in our epic FA Trophy run on 2018/19. Midweek trips to Weymouth and AFC Fylde instantly spring to mind of course as we had to play out a full five replays that season, bringing Yaxley, Pickering Town and Workington back to Rammy after draws on the previous Saturday.

However, with the changes in the world as it is, games in the FA competitions now have to be decided on the day and we were knocked out in sudden death after the five regulation spot kicks ended 4-4.

It continues a desperately lean run of results in penalty shoot outs for us, becoming the sixth spot kick loss in our last seven attempts going all the way back to November 2010.

Maybe it was a good job that none of the FA Trophy games in 2018/19 went to penalty shootouts as we suffered two eliminations in the space of 15 days in the September of that campaign!

After holding Kidsgrove Athletic to a 1-1 draw in the FA Cup preliminary round game, it required a replay at the HWRS early in the month. And 120 minutes passed on the Tuesday evening and with neither side were able to register on the target, we were forced into spot kicks.

Hitting the target was proving to be something of a struggle from 12 yards as well as just three of the opening six were scored as the Staffordshire side went 2-1 up. Phil Dean levelled the scores after the visitors missed. Their fifth was successful which means skipper Dean Stott needed to score to take it to sudden death. We lost 3-2 and exited the competition at the first hurdle.

The second came in the Integro League Cup first round at home to Clitheroe on 19 September after the ninety minutes finished 1-1 – like Saturday’s FA Trophy game, the game went straight to penalties.

And similar to that game, the five regulation attempts ended 4-4 so it went down to sudden death. Tom Kennedy and goalkeeper Sam Ashton made no mistake from their turns as did their Clitheroe counterparts. However, Luke Thompson fired high and wide over the crossbar with penalty number eight.

Our only success in this run came on 28 November 2017 in the Integro League Cup Round 2 at the Harry Williams Riverside Stadium when, after a blank 90 minutes with Hyde United on a chilly evening at home, we would progress!

Rammy keeper Danny Taberner was the start, saving Jones and Coates’ attempts to give the Rams a 3-2 lead going into the final round of the five. Hyde scored but so did Ben Richardson to see us safely through 4-3 – where we would go onto reach the quarter-final before losing 2-0 to Atherton Collieries.

That win broke a run of three successive shoot out losses.

The Hyde win came nearly a year after a 4-2 loss in the League Cup Round 1 away at Workington in November 2016. The first of the three in a row swung all the way back to the Lancashire FA Trophy home loss to AFC Fylde, going down 3-1 after a 1-1 on 16 November 2010.

However, the one inbetween is another that few will forget as they traipsed away from the HWRS at gone 10.30pm on Tuesday 3 November 2015.

It was the FA Trophy once again and a replay in the first qualifying round with Ashton United. After 120 minutes of pulsating action and 210 across the two games, neither could be split at 2-2 so it came down to a penalty shoot out.

After 19 perfect penalties, Ashton led 10-9 as keepers Grant Shenton and Paul Phillips either guessed the wrong way or were just beaten to the corners. It was incredible stuff to watch – whether at the game or sat around the world watching it on social media.

Penalty number 20 came … and was saved by Phillips. Having looked back through the twitter feed of that night, ‘Little Katie”, maybe kindly, just said that it was saved. It was such a shame, but it is just another tale of woe the Rams have had to endure from that 12 yard spot over the last 10 years.

A tale that continued, painfully, once again in Nottinghamshire on Saturday.

Thanks to Frank Crook for photo.