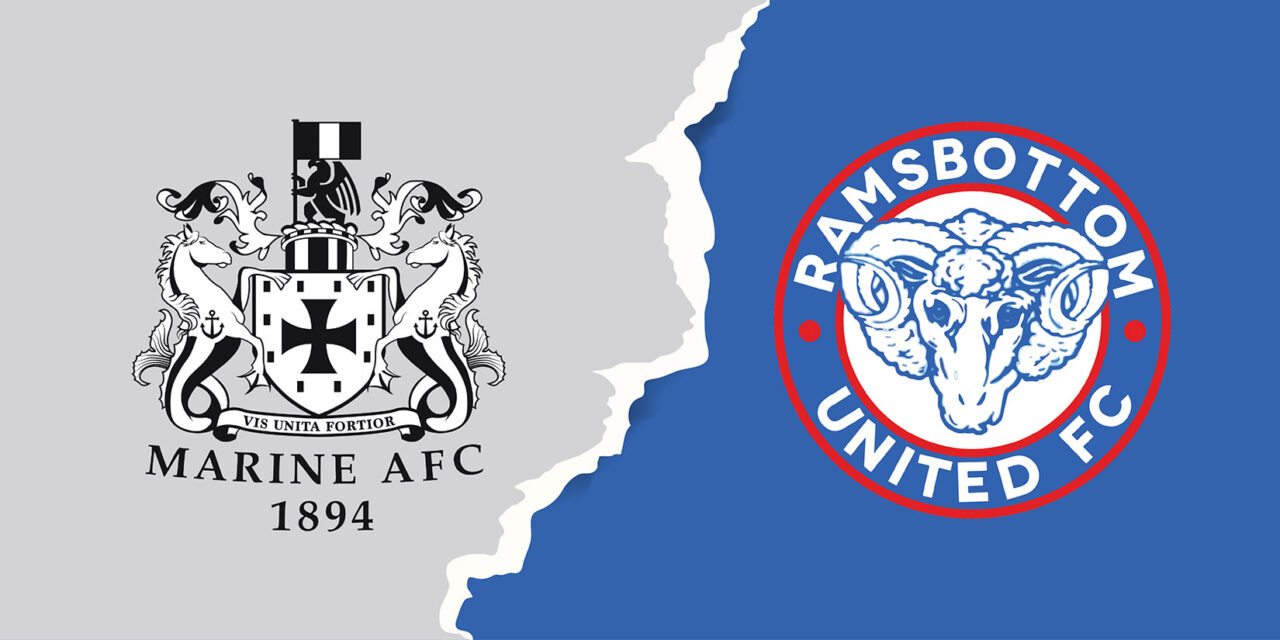 ADMISSION:
This match is ALL TICKET. Tickets are £10 for adults, £6 for concessions (U16 and over 65s), FREE for accompanied Under 11s.

There are NO cash turnstiles in operation but match tickets can be bought on the day of the game via the link below.

CAR PARKING:
Car parking is severely restricted at Marine, meaning all players, management and supporters will need to park in the adjoining streets. Given Marine’s home attendances this season average 955, it is worthwhile getting there early!

OVERVIEW:
With the heavy rains putting paid to last Saturday’s scheduled home game with Clitheroe, the Rams hope to get back on the pitch this weekend when we travel to league leaders Marine.

There is probably not a more difficult game to tackle at the moment with the Merseysiders the only unbeaten league side at home this season and the Rams having not played for two weeks after the Warrington Rylands game.

But Marine’s eight match winning run came to a juddering halt last Saturday when they lost 3-2 away at Leek Town – another reason why this game will far from easy as the home side look to bounce back.

However, there is no reason to be negative as it is always 11 v 11 at the start of every game, as they always say.

And we all remember what happened the last time we visited to the Marine Travel Arena on 14 March 2020 when 667 supporters enjoyed a thrilling encounter between two sides challenging at the top of the table. Step forward Jamie Rother and his 88th minute winner to take a 1-0 victory, in what would prove to be our last action that season before the null and void decision came for the 2019/20 campaign.

It will be the second time that we have played Marine this season – the 3-0 home defeat back in August a wake-up call to everyone but the Rams side will be very different from that game – five of the starting XI are either no longer with the club or unavailable.

Our hosts have been hugely boosted by an influx of supporters – they are averaging 955 so far this season, which is 342 more than any other side in the division and an increase of over 500 from the 2019/20 season.

As we all know, anything can happen! But, as mentioned further up on the article, get their early as parking is extremely difficult around the area.

STAT OF THE PREVIEW:
Since winning at Mossley 3-0 at the end of August, the Rams have played seven games away from home and scored twice (Jamie Rainford penalty v Prescot Cables and Steve Hoy header at Pickering). In those seven games, we have conceded 23!

HAVE WE MET… MARINE?

TEAM NEWS:
The Rams head into this game without Khalil Osi-Efa and Joel Earps, who are on the long term injury list while Cameron Collins, who was on loan at Litherland REMYCA, has come back after suffering a knock.

George Wyatt serves his one-match suspension after his red card a fortnight ago at Warrington Rylands while Mwiya Malumo has joined Ashton Town on loan.

Manager Lee Donafee was looking forward to the game on Saturday against the league leaders having had a decent week in training and going through a number of things in a behind-closed-doors friendly with Manchester League side Stretford Paddock on Tuesday.

“In many ways, we were lucky the game was called off last weekend as we had a few players suffering with colds and flu but we are all good for the friendly that we had in midweek.

“We worked on a few things and it was really good run out for us. The lads are determined after the last game, they have said that that sort of thing won’t happen again.

“It was individual errors, the lads knew that and we can’t afford to make those mistakes.”

Looking ahead of Saturday’s game, he was concious of his sides’ poor away record, something he “honestly can’t put my finger on.”

He continued, “I keep looking for reasons that aren’t really there. Maybe it is just down to us not switching on or playing for the full 90, which we should be experienced enough to do.

“But we know about Marine, they are a good side and there will be a big crowd on so it will make for a great contest.

“Every Rammy fan remembers the last time we were there – I was there as a Rammy fan that day. We can go there and play well and get something.”