ON THIS SATURDAY – 4th DECEMBER

We once again dip into the Ramsbottom United archives to see what happened on this respective Saturday in our non-league semi-professional history. And, it will be centered on 2010, 2004 and 1999.

A cold snap that left the Harry Williams Riverside Stadium under a deep blanket of snow put paid to the Vodkat League Premier Division match between Ramsbottom United and Winsford United, which was unsurprisingly postponed.

It didn’t stop Harry and Jack continuing to work hard later in the week as you can see from these pictures. 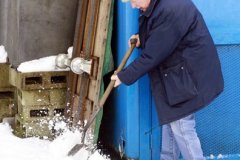 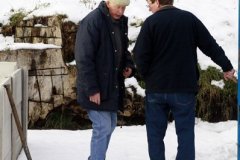 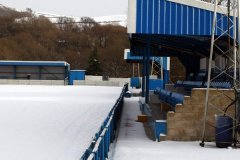 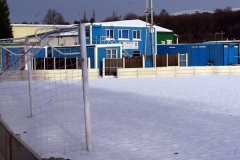 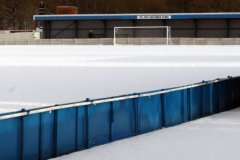 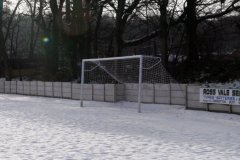 (Report from the Lancashire Telegraph archives)

The Rams crashed back down to earth after consecutive victories with a disappointing defeat against Maine Road.

However, the victory for the visitors will come as a great relief as they almost contrived to throw away a three goal lead.

Both sides made a lively start to the encounter and an early chance fell to Maine Road’s Mark Mitchell but he blazed high and wide of the goal from 18 yards.

The home side began to threaten following this early scare and Michael Saunders looked particularly lively when shooting wide after 7 minutes.

The Rams continued to dominate in terms of possession but were left to rue missed chances when the visitors eventually opened the scoring midway through the games opening period.

An innocuous free kick was floated towards theback post and Adam Kozlowski was unfortunate to see his defensive header fly into his own net.

Despite conceding, the hosts looked likely to get back on level terms and only poor finishing cost the Rams in the first half.

Another impressive run from Saunders on 31 minutes, latching on to a Kozlowski through ball, culminated in the striker firing the ball across the face of goal and Ewan Purcell was unlucky to divert the ball narrowly wide of the post.

On the stroke of half time Saunders almost pounced on Andy Robertson’s first blunder of the game in the Maine Road goal but after rounding the stranded keeper he fired across the face of goal from a tight angle.

The second half began disastrously for the Riverside outfit and throughout the opening exchanges of the half it appeared that there was only one team on the field. Maine Road were searching for a vital second goal and after a few scares for Mark Andrews, Mitchell scored a typical break away goal on 62 minutes.

The ball was played through behind Bill Robertson and Mitchell was able to slide the ball into the bottom corner beyond the desperate dive of Andrews.

This was no more than the visitors deserved during the second period as the Rams were failing to produce any meaningful chances.

Although Egan introduced a trio of substitutes only Saunders was able to hold his head high after scoring two late consolation goals.

After 73 minutes the fightback started with Saunders deservedly getting his name on the scoresheet by firing a low volley into the corner of the net.

Robertson thought he had reduced the arrears even further when he calmly tucked the ball home after instantly controlling a difficult cross, unfortunately the referee judged the centre half to have used his hand.

Following another poor decision regarding a penalty decision, when Purcell was clearly hauled over inside the box, Saunders scored another stunning goal by turning on the edge of the box before volleying superbly into the roof of the net.

Having only played one league game in the previous three weeks, the Rams were looking forward to getting back to competitive action.. but the weather had other ideas as it would leave us without a fixture on this Saturday and every Saturday up to Christmas.

The weather relented in time for the big local derby with Rossendale United on 27th December!