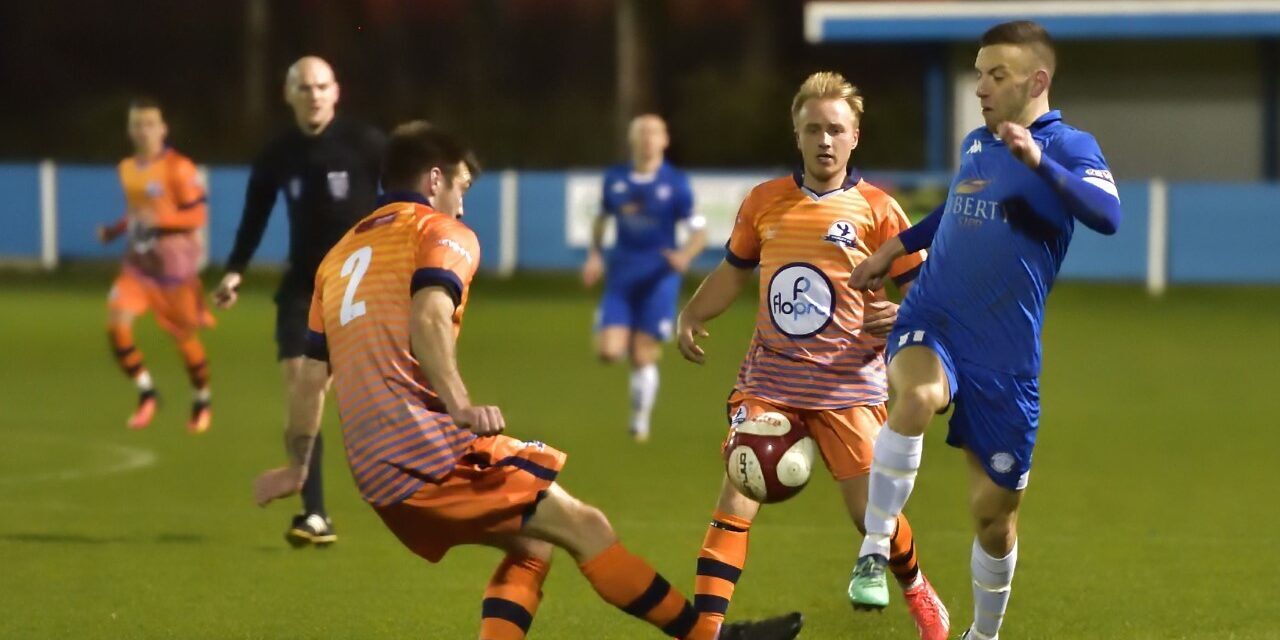 Having secured a draw seven days previously, the Rams forced Southern League strugglers Yaxley back to the Harry Williams Riverside Stadium for a replay in this second qualifying round of the FA Trophy – which took place on this very day two years ago – Tuesday 20 November 2018.

As we all know, of course, that word ‘replay’ would become something of a regular feature in this most incredible of seasons!

But ‘replay’ wasn’t the only regular phrase used in this epic Trophy run … ‘Goal for Nic Evangelinos’ would become a very well worn one across the course of the twelve games.

This game was something of a formality, though, as moderately new manager Chris Willcock, taking charge of the side for the tenth time, was still to endure a defeat as his team comfortably saw off the Cambridgeshire outfit 5-1.

And it was in no small part down to the prolific Evangelinos’ first hat-trick for the club and some outstanding play in the build ups to the others.

The writing was on the wall as early as the third minute when he was upended in the box after just three minutes, which allowed Nialle Rodney to ruffle the net from the penalty spot.

This woke the visitors up and they looked to test Sam Ashton in the Rammy goal when forward Daniel Cotton lifted his shot over the bar but they offered little else as Rodney and Tony Donaldson both had good chances to stretch the Rams advantage.

It was something of a surprise that it was Yaxley who were next on the scoresheet as Cotton’s cross was turned into his own net by Luke Thompson for their equaliser – very much against the run of play.

That just made the Rams more determined with the woodwork proving effective as a shot stopper!

On 36 minutes, Evangelinos got his first, smashing the ball home after his initial attempt crashed against the cross bar.

He would add a crucial second right on the half-time whistle to allow the Rams to go into the break 3-1 up.

The second half was as one sided a game as it could be as the visitors were fortunate only to concede two more before they climbed back on the coach for the lengthy journey home.

Nialle Rodney had a goal disallowed for offside early in the second half before Luke Thompson righted his earlier wrong when he headed sweetly from a corner.

The Rams would make it a perfect five when Evangelinos claimed the match ball (!!) to complete the scoring on 72 minutes.

Ten games in charge for manager Willcock and still no defeats and an almost mystic comment in his post match interview too.

“To take the lads to Wembley will be a tough ask in this competition, a really difficult task when the Conference and Conference North teams come into it.

“But can we take the team a couple more rounds? I’d like to think so, maybe if we can get a plumb tie then that would be a nice end to the competition.”

Little did he know then what we all know now… a couple more rounds was just the start of it!

And Evangelinos, with four goals in the competition already, would thoroughly enjoy it! But then, didn’t we all.

Replay number one ticked off…. what’s next?

Thanks to Frank Crook for the photo.