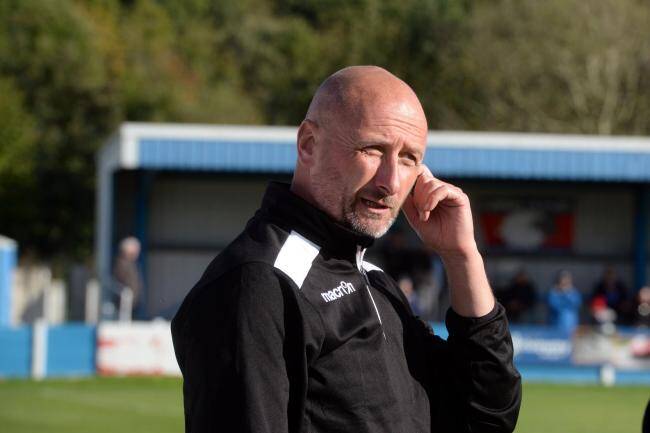 It was congratulations to Ramsbottom United’s manager Chris Willcock this week as he clocked up a full two years in charge at the HWRS on Tuesday.

Chris took charge of the Rams for the home game with Chasetown on 6 October 2018 following the rather surprising departure of Mark Fell, who took his Rammy win percentage of 34.5% one league higher by signing on with Lancaster City. But the club moved quickly to appoint their former player, who scored 17 goals in his two season stay from 2000 to 2002.

He had an outstanding record as a manager around the non-league scene, taking Glossop North End to Wembley in the FA Vase in 2014-15 and was the manager of Shaw Lane FC just as they folded due to financial problems when he headed back to the Riverside to take the managerial reigns.

And he has brought that fine record to the HWRS, becoming the fastest manager to record 50 wins – achieving that feat in his 83rd game, the league win over Pontefract Collieries last Saturday. Anthony Johnson and Bernard Morley reached the 50 win mark in 84 games and Ken Bridge 111.

So where does Willcock rank in the history of Ramsbottom United managers? Let’s have a closer look ….. in focus. Here is a full break down of our managerial record since we turned semi-professional and joined the North West Counties League in 1995.

The legendary Ken Bridge was in charge in that first season and started with a 3-1 win at Squires Gate in August 1995. He replaced Malcolm Holt – who became in latter years the clubs’ secretary. He managed the club for a total of 271 games and scooped the North West Counties League Second Division Manager of the Year in 1997 when we pipped Haslingden to the title on goal difference.

His untimely death, in the dressing room following the 2-1 defeat to Cheadle Town in February 2001 was a hammer blow to the club. Ken is remembered extremely fondly at the club and his name adorns the main entrance gate to the Harry Williams Riverside Stadium.

He had 271 games in charge and won 124 of them, recording a win percentage of 45.76, which comes in fifth of all the permanent managers in our semi-pro years. That 2000/01 season that saw his passing would see us finish third in the North West Counties Division One, four points behind the eventual champions Rossendale United.

Mike Kelly and Mike Feeney were called upon to finish the season before Kelly was given the job full time ahead of the 2001/02 campaign. Kelly and Feeney won 15 of their 22 games in charge and hold the best win percentage of all of the semi-pro managers of 68.18%.

Kelly found things harder going on his own with 23 wins in 65 games and he saw his place taken by Andy Grimshaw. Grimshaw and his eventual successor Vince Overson also struggled with 15th and 17th place finishes in the NWCL not exactly what the Rammy faithful – not less Harry himself – would have been hoping for.

It was the arrival of Derek Egan at the start of the 2004/05 season that turned things around and he led the side to an impressive fifth place in the table, way behind the winners and now League One participants Fleetwood Town. Egan’s won 27 of his 53 games – a win% of 50.94 but his demands for more money ahead of the next season saw him depart after just a single year in charge.

What followed for the next few seasons was indifference once more. Lee Sculpher took charge of 123 games, the most of any Rammy manager since Bridge but only won 44 of them and had 35.77% win percentage although his side did score goals – in his games, he oversaw a goal difference of plus 7 despite losing 49 times.

“Scully” had over two years in charge from August 2005 to October 2007 before Neil Hart made the short trip from Turton when he left but it was a tough task for him and he departed at the end of the 2007/08 season with just eight wins from 29 starts.

Former Bury, Leicester City, Hereford United and Brentford midfielder Andy Feeley was next in the hot seat and his record wasn’t dreadful with 11 wins from 27 games at the top end of the 2008/09 NWCFL Premier Division campaign … but he was rather forced to leave the club in mid-January 2009. I think any Rammy supporter will know why!

His assistant Paul Williams was put in temporary charge for the rest of that season and with just one win from his final eight league games, the Chairman decided not to offer him the full time position.

Who could possibly turn things around at the Rams? Two moderate youngsters, still playing and in their prime (some would say!)