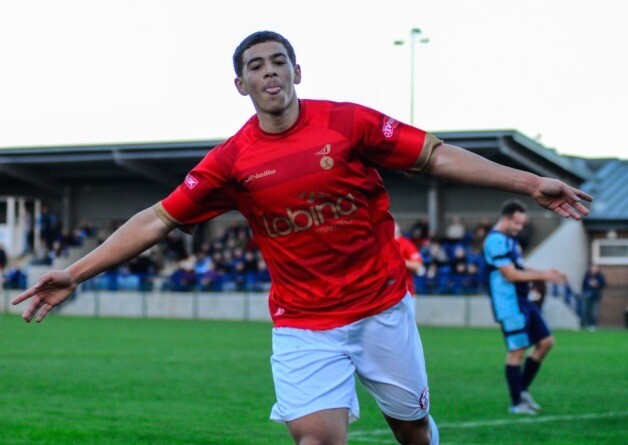 It was the 20th September 2014 when promoted Ramsbottom United, playing in the Northern Premier League Premier Division for the first time after the dramatic play-off win over Bamber Bridge, headed across the Derbyshire Dales to face the well established Ilkeston FC.

With four wins and five defeats from their opening nine games, the Rams were in mid-table but overtook their hosts after returning with a 4-2 win at the New Manor Ground.

But lining up in the Ilkeston side was a talented 18-year-old striker, who had moved his way around the non-league scene after being released by Coventry City, aged 14.

Spells with St Andrews FC in Leicester and Oadby Town followed before he landed himself at Ilkeston, taking up a scholarship at their Academy in 2013.

A blistering start to the season saw the teenager score twice against Trafford and added goals against Ashton United and FC United of Manchester.

With a bevvy of scouts tracking his every move, he added a goal to his bulging tally against the Rams and here is the match report of that game from the Rammy archives.

“Ramsbottom United returned from their first ever visit to Ilkeston with a thoroughly deserved victory which saw them leap-frog their hosts in the table.

Such was the visitors’ dominance that the score-line flattered the home team, whose supporters were seen to be deserting in droves long before the final whistle.

The Rams took the game to the hosts from the off, and whilst the first half may have ended score-less, the second half produced a goal feast, with the visitors deservedly finishing on top.

The closest either side came to scoring in the first half was when a superb drive from Osebi Abadaki was tipped over by the home keeper, but within three minutes of the re-start, the goal that had been threatening finally arrived.

Lee Pugh sent in one of his trademark long throws, and Cedric Krou beat the keeper to the ball to send a back header over the stopper and into the net.

Tom Williams, minutes later, almost added a second, only to be denied by the keepers legs, but that second goal wasn’t long in coming. On 57 minutes, Williams was fouled, and from the resultant free kick, Scott Burton was on hand to bury the ball and double the lead.

Almost immediately Ilkeston grabbed a lifeline when a one-two on the edge of the area fell to Che Adams, and his drive left Grant Shenton in the Rams goal unsighted, to give the home side some hope.

They barely had time to celebrate, however, for within a minute, the Rams had restored the two goal cushion. Krou mis-kicked the ball, but it fell nicely into the path of Jordan Hulme, and he slipped it home.

The home keeper’s legs again saved the day, this time for the unfortunate Joel Pilkington, but with the ball refusing to enter the net in the first half, the second period was enjoying the totally opposite effect.

Once again the home side reduced the arrears, when, on 72 minutes, the referee over-ruled his assistant who was waving for a foul, and allowed play to continue. The ball played into the area, and Dominic Smalley was adjudged to have had the final touch as he notched an unfortunate own goal.

But again, before the celebrations had died down, any hopes of a come-back for the home side were drowned out with Williams notching his first goal for the club at the far post from an Abadaki cross.

Richards saw his effort hit the bar for the home side, but in reality, the Rams held on comfortably for an excellent and well-earned three points, with a performance that oozed class and confidence.”

Some seven weeks after scoring the goal to cut the arrears following Krou and Burton’s goals – he was snapped up by Sheffield United, playing 47 times for them before heading to Birmingham City for 116 appearances, netting 34 times.

Ahead of the 2019-20 season, Adams signed up for the finest football club on the south coast, Southampton, scoring 13 goals in his 66 clubs for the Saints.

He is likely to be facing England in Euro 2020 this evening, just 2463 days after slotting past Grant Shenton in the Rams goal.

It is a story that dreams can come true. Many a non-league footballer has gone on to greater honours – Jamie Vardy for instance amongst many more.

It is a story of never giving up hope.