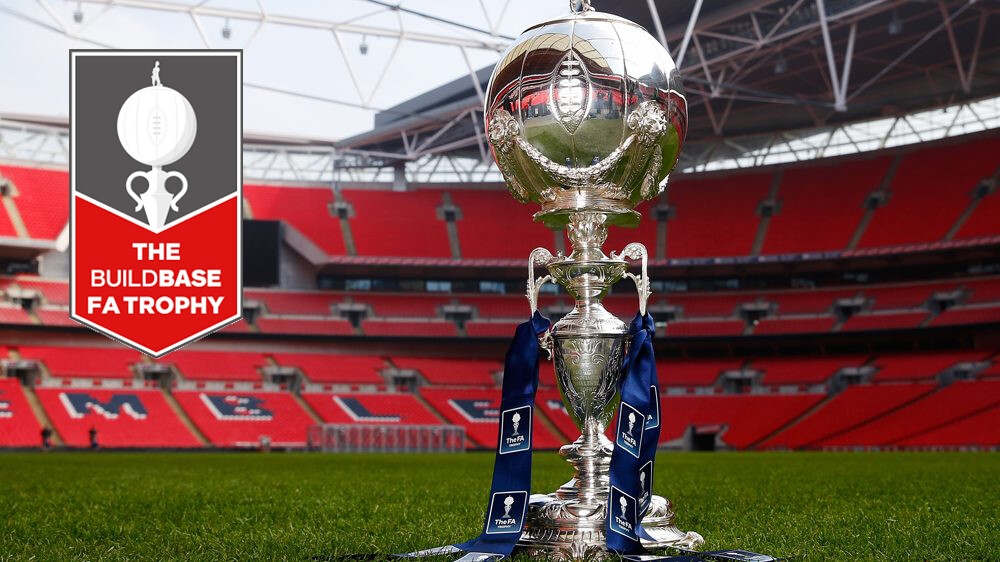 This coming Tuesday night’s journey for the game with Mossley is just 21 miles from Ramsbottom. That is all! A 42-mile round trip for a match in an FA competition. On a Tuesday night!

Any Ramsbottom United player, management, staff or supporter who followed the club in the epic FA Trophy run of 2018/19 season will scoff at such a measly journey when it comes in comparison.

Yaxley in Cambridgeshire, Weymouth in Dorset and Fylde on the west coast were all visited on that incredible season …. and all on a Tuesday night.

Give or take a handful – that is something like 1,000 miles. And for those intrepid Rammy 17 (which included your author, who didn’t undertake the near 600 mile round trip – just a short slide down the south coast!), that was just one of the lengthly excursions we had.

Having beaten Trafford 2-1 and Frickley Athletic 3-0 – on Saturdays – in the first two rounds of the competition, our next challenge was an away day to Yaxley, a small town to the south of Peterborough in Cambridgeshire, just off the A15.

Ruben Jerome and Nic Evangelinos both scored for the Rams in nine second-half minutes but it wasn’t enough to put away the Southern League Division One Central outfit and we returned around for the 158 mile journey home with a 2-2 draw and a replay.

It was Yaxley’s turn to undertake the long journey to Ramsbottom the following Tuesday night and a Evangelinos hat-trick – who else in that FA Trophy run – and goals from Nialle Rodney and Luke Thompson – who scored at both ends – gave us a 5-1 win.

Next up was Pickering Town away and we played out a 0-0 in North Yorkshire before bringing them back to the HWRS and running out 2-1 to the good thanks to Evangelinos and Kyle Jacobs strikes, the latter coming just a minute from time.

And we were into Round 1 proper! Yes, the Rams in the main draw for the FA Trophy with a Saturday away day to Workington.which finished 0-0 and the replay, back at home, was won 2-0 with Jerome and, guess who, on the scoresheet.

The New Year bells chimed and into mid January we went as the draw paired us with the Southern League Premier South promotion chasers Weymouth. 457 spectators came to the HWRS for the match in Round 2, many coming from the south coast for a day out in our magnificent town and travelling the steam railway to the ground.

Weymouth took the lead but we levelled through Evangelinos before the visitors regained their advantage with seven minutes left. Iyrwah Gooden’s 90th minute goal saw the final score at 2-2. And then a dilemma – a near 600 mile round trip on a Tuesday night …. or not?

No question really and what a night it was. No-one who was there on 15 January 2019, on a chilly night in deepest Dorset will forget it. Did anyone really give us a price? No, not really.

As your author, who was interviewed on BBC Radio Solent about who the hell Ramsbottom United were will testify, there wasn’t much hope of a surprise against the high flying Terras. “We hope you get absolutely stuffed” said the radio interviewer. Did we get stuffed? Did we not!!!!!

An own goal gave us the lead but it was cancelled out two minutes later but a truly incredible second half and goals from Eddie Cooper and Jason Carey brought us an unimaginable 3-1 win. Wow! Just wow!

It was another Tuesday night when we entered round 3 – the last 16 of the competition and the visit of National League side AFC Fylde to the HWRS. Only one level 8 side were left in the competition … it was us!

If the Weymouth Tuesday night was something to behold, the Tuesday night on a soaking wet night in Ramsbottom is something of extraordinary legend. 743 people packed into the ground and they could barely believe their eyes. As someone who listened to the game on the radio, I certainly couldn’t believe my ears!

The replay at Mill Farm a week later was a step too far although we did take the lead when Kieran Lugsden scored on 26 minutes but the power and strength of AFC Fylde told in the end and they ran out 4-1 winners. Fylde went on to win the FA Trophy, beating Leyton Orient 1-0 at Wembley Stadium. They were just three minutes away from being knocked out.

Six players scored five goals in the ‘proper’ rounds of the competition. Three of them are now playing in the Football League. One of those six was Nic Evangelinos of Ramsbottom United.

21 miles to Mossley? No problem for an FA competition! Bring it on.