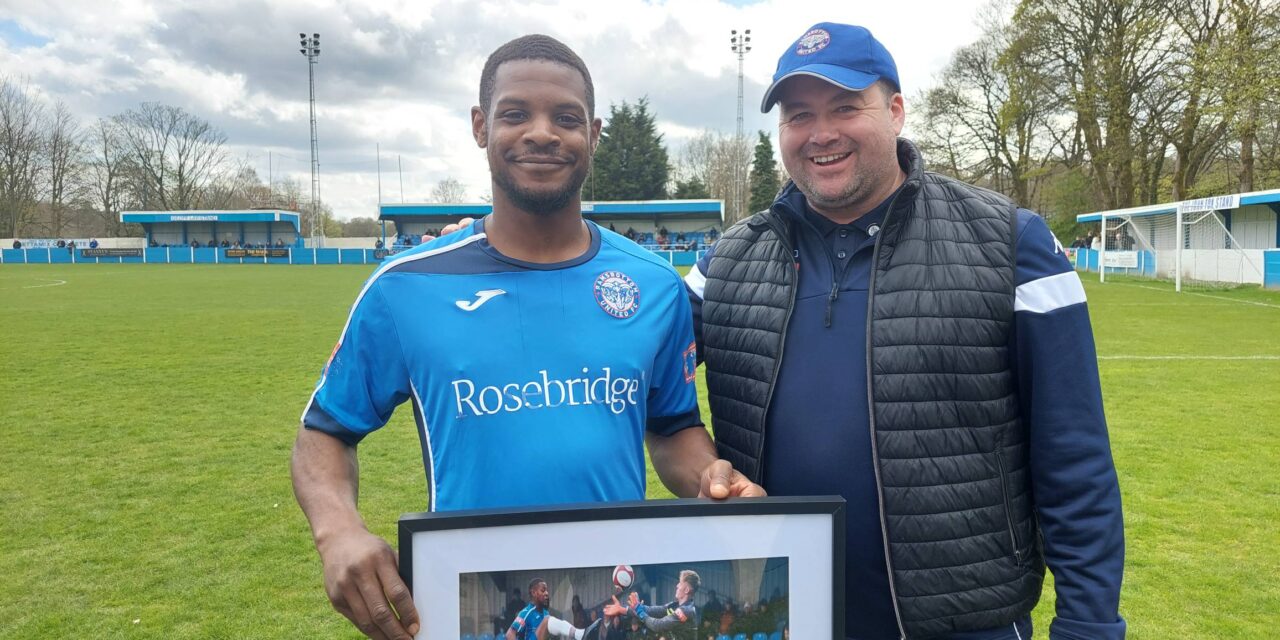 With emotions running high on the day, fuelled by the announcement that Tom Kennedy was due to be playing his last home match for the club, the Rams were aware they needed at least one point from the match to stave off remaining relegation concerns.

Opponents Trafford, having lost their last six matches in a row, on the face of it didn’t look to present massive problems.

However, the memory of being pegged back to 2-2 in the dying minutes of Saturday’s match at the hands of already-relegated Market Drayton had done little for Rams’ confidence during the intervening 48 hours.

Suffering from unavailability of players again, the Rams’ starting line-up had a rather lop-sided look to it. For example Owen Collinge, more accustomed to playing right back, was picked to play on the left wing. Nevertheless, in the first few minutes, it was Collinge who created a golden opportunity for Jack Grimshaw, a midfielder selected to play on the right wing.

Unfortunately, the latter muffed a straightforward chance barely five metres away from goal. Soon after, from an in-swinging Tom Kennedy corner, Domaine Rouse headed narrowly wide. Later in the half, Rouse, stand-in striker for injured John Murphy, was through on goal only to scuff his attempt at a shot, allowing the keeper to dive at his feet to smother the threat. It was already feeling like another of those frustrating days at the chalk-face.

Worse was to follow. With 43 minutes on the clock and half-time looming, a bobbling ball at knee-height, 35 metres from the Rams’ goal, fell beguilingly into the path of Trafford striker Michael Burke. Sensing a shooting opportunity, he connected superbly with a magnificent volley that, gaining height through the air, then savagely dipped below the crossbar and straight into the net, leaving keeper Stewart looking shell-shocked.

With the wind knocked out of their sails, the Rams started the second half lethargically. Taking advantage of the situation, ex-Ram striker Max Hazeldine could easily have added to the home team’s woes when, directly through on goal, he somehow though managed to blast his shot wide. On another occasion, only a brilliant last-ditch tackle by Kennedy prevented a Trafford player capitalising on what otherwise appeared a simple tap-in chance.

A round of second half substitutions seemed to be making little impact on a game looking to be quietly slipping away from the Rams. However, the last substitution to be made in the 78th minute brought Kayle Power on to the field of play. A winger, able to offer genuine width, he immediately injected enough pace and close control of the ball to worry the Trafford defence.

Skilfully breaking free of three defenders down the right wing after 85 minutes, he made it to the by-line before arrowing in a cross to the front of goal. With keen anticipation, Rouse met the ball with a glancing header which evaded the keeper and nestled into the net, drawing the game level at 1-1. Despite further pressing forward in the last few minutes, the Rams ended up though having to be content with the one point.

Taking into account the results of other teams in the relegation mix, the Rams finished the day in 15th place, however they are still not mathematically assured of avoiding 18th spot ahead of next week’s last round of matches.

Tight margins have been very much the story of the season. Going right down to the wire, the Rams continue to flirt with danger in a way that has so often seemed self-inflicted throughout this present league campaign.

Pictured above: Goalscorer Domaine Rouse being presented with a framed photo ahead of the game by manager Lee Donafee after reaching 50 appearances for the club.