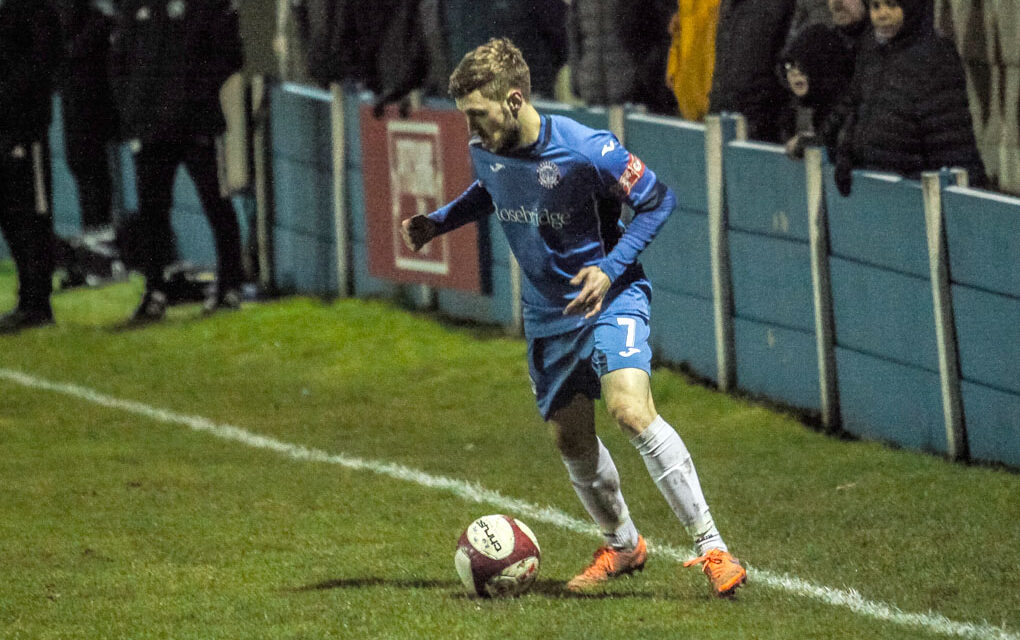 Following their narrow 2-1 defeat last week at promotion-chasing Leek Town, the Rams came into this match knowing they had a different kind of battle on their hands against a side, like themselves, desperate to avoid the dreaded 18th place ‘relegation play-off’ spot.

The referee had barely blown his whistle to set the match going before full-back Owen Collinge surged down the right and delivered a well-flighted cross to the far post. Timing his run to perfection, winger Billy Hasler-Cregg (pictured above) swivelled on his left foot and unleashed an unstoppable volley into the roof of the net with his right. Showing brilliant technique and execution, it was a goal which would have graced the Premier League. Marking his first goal for the club, it is certainly one that Billy will remember. In the nervy context of the match, even more importantly, it got the Rams off to a flying start with an indicated ‘Golden Goal’ winning-ticket time of just 2 minutes.

It might have been 2-0 soon after when February Player of the Month John Murphy, shrugging off a defender’s challenge, was straight in on goal only to blast his shot over the bar. From this point on though, Prescot came back into the game. Poor marking from a corner – a common failing that the Rams need to address – provided visitors’ main danger-man Sam O’Halloran with a clear heading opportunity which, to keeper Tom Stewart’s relief, the striker ballooned over the bar.

As the first half wore on, Prescot came even more threateningly into the game. From a cross out on the left, a right-foot volley from Ian Kearney cannoned against the crossbar while a few minutes later the visitors’ Josh Gregory hit a rasping drive from 20 metres out which went narrowly wide of the post.

Fortunately, the home team appreciated the need to re-assert themselves. Clever combination play down the left between skipper Tom Kennedy and Hasler-Cregg led to the latter delivering a cross which Murphy met with a powerfully-directed header, only to see it smack the foot of the post and bounce out.

Further opportunities kept presenting themselves to both sides in a game that swung like a pendulum from one end of the pitch to the other. As might be expected in a relegation dog-fight, tensions ran high with incidents arising between respective players of the two sides which the referee did well to control with a mixture of patience and firmness. When half-time arrived, it seemed almost miraculous, given the sheer number of chances created, that the score still remained only 1-0.

The second half continued in similar mode. Neither side was for backing down. One different aspect to the pattern of the game became apparent though with the visiting team giving greater freedom to roam to their no. 11 Jack Goodwin. In the matter of ten minutes or so midway during this second period of play, with no defender picking him up, he found himself in acres of space, having three gilt-edged opportunities to equalise. Two of these were point-blank, short-range headers in front of goal. With Rams keeper Stewart helpless to intervene, somehow Goodwin put the ball wide when, on both occasions, it seemed much easier to score. The sense of relief etched on the faces of Rammy defenders told its own story.

Not that the traffic was entirely one-way. Hasler-Cregg, enjoying an excellent match all-round, continued to be dangerous down the left hand side. The pace that the match was being played at was phenomenal and a credit to the fitness levels of both sides. The always tireless Jamie Rother came near to extending the Rams’ lead with a drive from the edge of the box that went only a whisker wide of a post. Then, the next moment after, the ball was back down at the other end and Stewart was pulling off a stupendous save from a well-struck shot from only ten metres out that had ‘goal’ written all over it. Eventually, as if taking pity on the frayed nerves of Rammy fans, the ref blew the final whistle.

Given the high stakes going into this game for both sides, the occasion was perhaps bound to have turned out something of an emotional roller-coaster. However, on the back of this hard-fought win, the Rams clawed their way back up to 14th place. With the team playing very well as a unit, the victory marked three successive home wins and three successive clean sheets. Meanwhile, the visitors, although left in occupation of 18th place relegation play-off spot, can at least take consolation from having given the game their best effort.