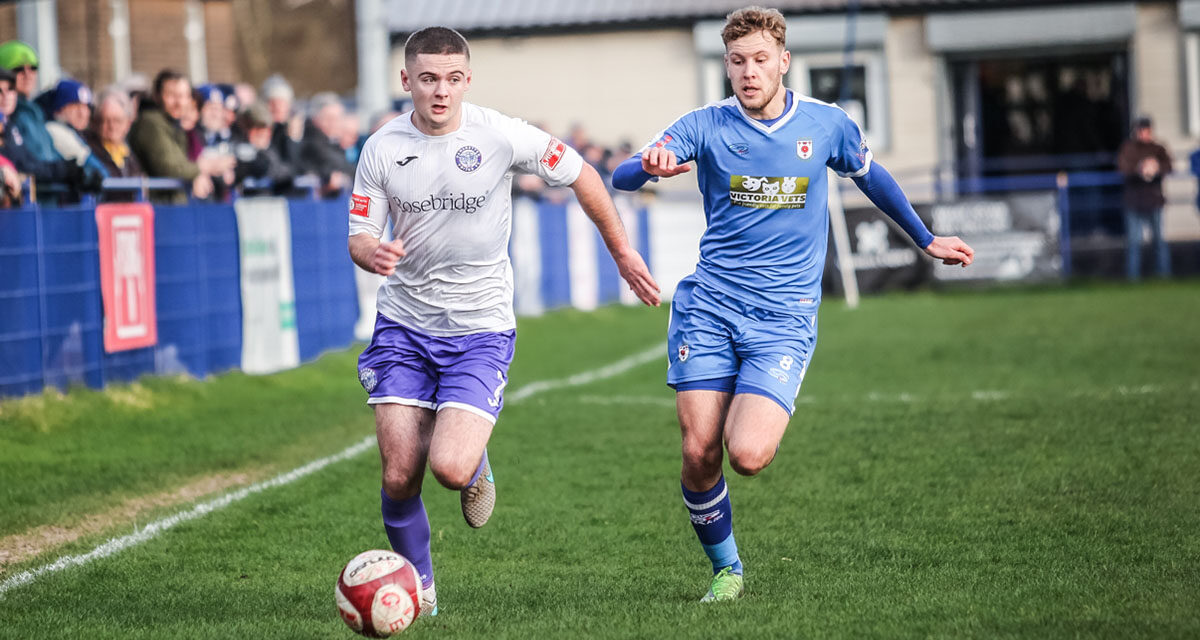 Having seemingly put their poor recent run of results behind them in their last outing where a well-deserved 3-0 victory over Clitheroe eased relegation fears, the performance in front of the optimistic travelling supporters on the Derbyshire border proved a massive disappointment.

Just one change was made by manager Lee Donafee, with young George Wyatt replacing captain Tom Kennedy, who reported in ill during the morning.

But that was hardly an excuse of an abysmal performance in a game where the Rams were masters of their own downfall.

Every one of Glossop’s goals was set up by the visitors, whilst they seemed incapable of inflicting any such pressure on the home team, with barely an attempt for North End keeper Harry Allen to deal with.

The pitch at Surrey Street was hardly conducive to a game of pretty passing football, but the home side reacted with a more direct style of play, whereas the Rams game was littered with misplaced passes, and a general feeling of frustration.

The home side took the lead after 16 minutes, and with an air of inevitability, it was a player released by the Rams earlier in the season, Jamie Rainford who notched it.

The first of the Rams errors saw an attempted header flying backwards into the path of the predatory Rainford, and he took his time before confidently lashing the ball past Tom Stewart in the visitor’s goal.

This came minutes after an early warning for the away team, as a dangerous cross from the left somehow evaded everyone in the six yard box, and the Rams defence breathed a sigh of relief.

During a largely uneventful first half, the only two attempts by the visitors came with a weak effort from Owen Collinge, easily gathered by Allen, and a tempting cross from the right that met the head of Godwin Abadaki but glanced off to such an extent that the ball went out for a throw-in.

John Murphy and Abadaki both had attempts early in the second half, but neither looked likely to provide an equaliser, and within a three minute spell, any such equaliser would have proved fruitless.

On 58 minutes, as the Rams looked in search of a response, an attempted cross from the left was wildly miscued, so much so that it swung away towards their own goal. Glossop winger Keaton Mulvey could hardly believe his luck as he raced forward fifty yards and with the bewildered Rams defenders giving chase, Mulvey confidently placed the ball past Stewart, and once again the visitors had assisted the home team to score.

Within three minutes, another stray pass on the edge of the penalty area fell to that man Rainford, and he had the presence of mind to feed Mulvey on the left-hand side of the area, and he slammed the ball home from an acute angle to complete the Ramsbottom misery.

It was then a case of stemming the tide, which, thankfully was the case, but in the remaining half hour, the home side had very little to deal with as the game petered out into what was a comfortable win for Glossop, thanks, in the main, to the generosity of a poor Ramsbottom United team, leaving the once optimistic supporters scratching their heads as they left the ground, with worrying comments regarding relegation coming to the fore.