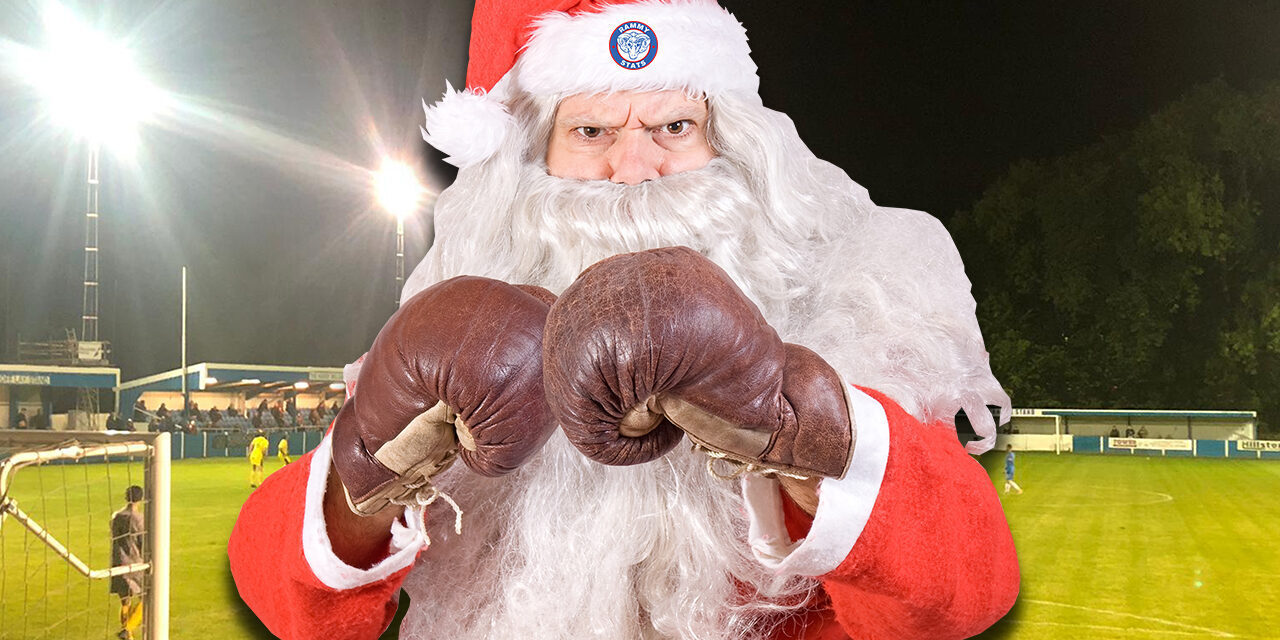 One of the great Christmas traditions within the game is the chance to blow off the cobwebs of the sizable lunch and copious amount of mince pies the day before and get a ‘local derby’ footballing fix on Boxing Day.

It is the opportunity to put on your new socks, a gift from auntie and uncle or your new Ramsbottom United woolly hat and scarf set that you always wanted and get 90 minutes of football to resume some sort of normality – not withstanding a couple of mince pies and a turkey sandwich in the coat pocket for good measure!

The Rams’ record on St. Stephen’s Day in more recent times is very good with five wins from their last six but that came after not recording a victory for ten years from 2001 to 2010.

So let’s take a look back over our Boxing Day games across the years, starting with just last year and a mesmerizing 7-1 victory over Mossley at the Harry Williams Riverside Stadium.

410 spectators came and witnessed the perfect performance from the powerful Rams, who ran up their biggest tally of goals since smashing Worksop 7-2 in the FA Trophy some five years previously.

Tom Kennedy’s penalty after 10 minutes started the rout before Karl Jones added a second quarter of an hour later. Former Rams striker Jamie Rainford pulled one back for the Lilywhites but four goals in the space of ten minutes, only separated by the half-time interval saw the Rams steam ahead.

Nic Evangelinos hit home just prior to the break before a Ruben Jerome double and Josh Hmami fired the on-form Rams, who were unbeaten in their last seven, into a 6-1 lead. Substitute Mason Fawns put the cherry on the cake on a performance that manager Chris Willcock described as “outstanding”.

Boxing Day 2018 saw Radcliffe make the short trip to the HWRS and were beaten 2-1, which would be their first away defeat of the season, in an action packed contest which lifted the Rams to fifth in the table.

Prolific striker Ben Wharton put Boro ahead on 22 minutes but Jamie Rainford equalised on the half-time whistle and then, on the hour, Tom Kennedy’s expert free-kick sailed past Olly Martin in the Radcliffe goal for the winner.

Unfortunately for us, they would get their revenge in the end of season play-offs, defeating us in the semi-finals before securing promotion to the Premier Division.

Our only Boxing Day defeat in that run of six games from 2011 came at Stainton Park when a 95th minute penalty denied the Rams a share of the spoils in 2016.

Ryan Salmon had given the Rams a 23rd minute lead only for Elliot Rokka to level for the hosts early in the second half. It was looking for all money that the game would end a draw, especially when Martin Fearon pulled off a Bamber Bridge-esque save in the dying minutes but Damian Green fouled Boro substitute Timmy Raheem which led Jack Hindle stroke the penalty to steal all three points for his side.

The entertainment value was first class in 2013 when Salford City headed to the HWRS in the NPL Division One North and the Ammies were ‘ammered 5-2 after an initial onslaught of three goals in the opening 21 minutes – two from Phil Dean which sandwiched Lee Gaskell’s effort put the Rams 3-0 up.

Mark Battersby responded with two for Salford in the space of five minutes and it was all hands to the pump before Gaskell’s second eased the fears and Grant Spencer’s late penalty sealed a 5-2 success.

Wonder whatever happened to our opponents that day?!?

The Rams had had three and a half weeks between games in 2012 but the trip to Clitheroe beat the elements and we would beat the Shawbridgemen thanks to a Lee Gaskell second half triple.

Simon Nangle had given the home side a 34th minute lead but Gaskell was on the end of great moves to take his tally for the season to 18 with the hat-trick and the Rams a 3-1 victory in his pulsating local encounter.

The Rams kept pace at the top of the North West Counties Premier Division with a thrilling 3-2 win over valley rivals Bacup Borough in 2011.

Three goals in just six minutes either side of the break pulled the Rams in front after falling behind to Adrian Bellamy’s penalty but Grant Spencer (42), Phil Dean (44) and Jon Robinson (48) eased us clear only for Matthew Hampson’s strike closed the gap once more but we held out for the crucial three points.

Prior to these good results came a run of rather indifferent ones though, inamongst quite a few games that didn’t take place because of the weather.

In 2008, Craig Buckley’s strike five minutes from time ensured the Rams took a point from their home game with Flixton while Rammy legend Jon Robinson’s 67th minute goal, along with a penalty from Nathan Forrester for Salford City cancelled out Matt Eckersley’s sole effort for the 2-1 home loss in 2007.

That just leaves three games – two against Rossendale United in 1998 and 2000, which the Rams won. Andy Clarke and Steve Orrell took us to a 2-1 win in 1998 while Russ Brierley, current Rammy manager Chris Willcock and Phil Porter sealed a 3-0 win in 2000.

And that means there is one game not mentioned as yet ……