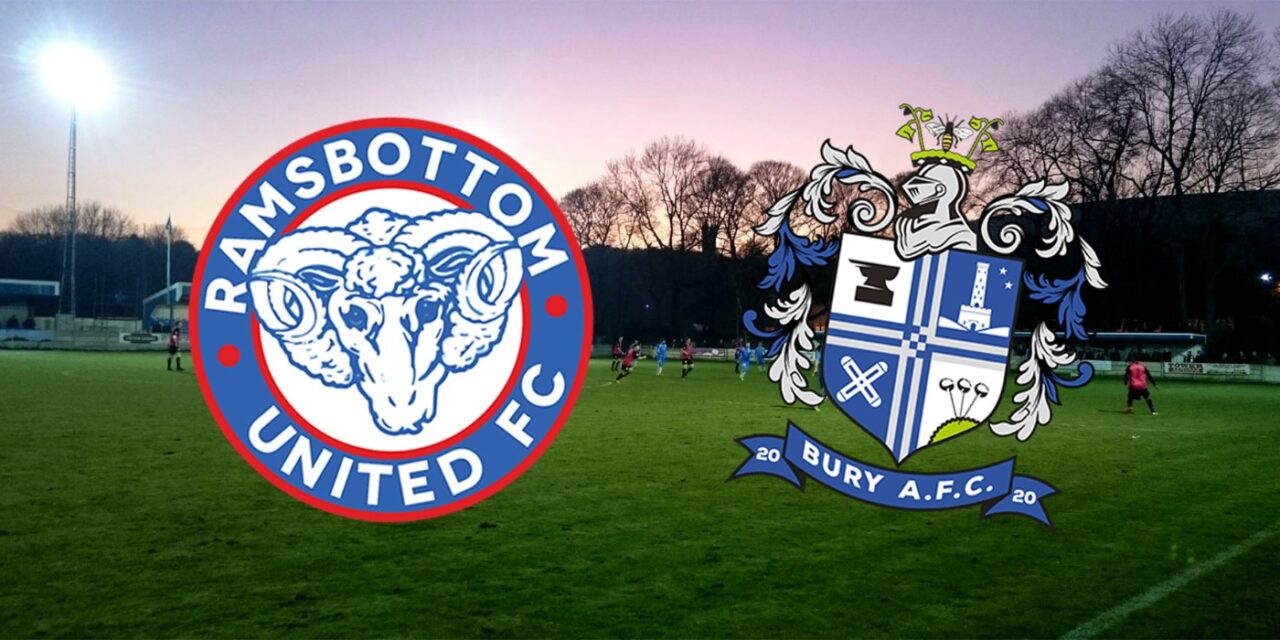 TICKETS and GETTING TO THE GROUND:
Pay on the gate. Adults £5, concessions (over 65s and under 16s) £3. The Harry Williams Riverside Stadium is at Acre Bottom in Ramsbottom (nearest post code BL0 0BS).

CAR PARKING:
Kick off is at 3pm on Saturday but there is limited parking on the ground, especially with Ramsbottom Cricket Club’s second XI taking on Lowerhouse Second XI on the neighbouring ground so spectators are requested to park in the town’s car parks or on nearby streets.

BY TRAIN:
Alternatively, you can travel by scenic East Lancashire Railway from Bury Bolton Street with a steam-hauled service leaving at 11:55 and a diesel-hauled service at 13:00 – the service takes some 20 minutes. There is a special service running from Ramsbottom back to Bury at 17:10 – this is a specially delayed service to transport supporters back. Enquire at Bury Bolton Street station on Saturday for more information.

FOOD and DRINK:
Our famous tea bar will be open for pie and peas, tea, coffee and cold drinks. Our main bar for more alcoholic beverages is over at Ramsbottom Cricket Club and they will also be putting on a ‘can bar’ outside and their tea room will also be open throughout the day.

OVERVIEW:
It was Halloween. October 31st 2020. And Kyle Harrison slotted home the 86th minute winner to defeat Prescot Cables in the NPL Division 1 North West, a result that we see us climb to the summit of the table. Four days later, the FA announced that non-elite football would cease. And that was that.

That was 266 days ago. 266 long, exasperating days. But finally, that wait is over and we are heading back home to welcome the newly-formed Bury AFC on Saturday. Ohhhh it is so so good to be back!!!

There is a decent crowd expected for the game against the fledgling ‘phoenix’ club as they prepare for kick off their first season as a club, playing in the North West Counties League Division 1 North.

And to help the new club in their endeavours, Ramsbottom United have kindly agreed to split the match receipts 50-50 – a very generous offer to assist Bury AFC on their way as they kick off their new identity.

HISTORY:
This will be the first ever meeting between Ramsbottom United and Bury AFC – the new club being formed following the sad demise of the 135-year-old Bury FC, which was placed into administration in November last year.

Saturday’s game will be Bury AFC’s final pre-season encounter before they head in their inaugural North West Counties League campaign with an away game at Ilkley Town before visiting Atherton LR and then, their first home game the following Saturday against Brent Peters’ Bacup Borough.

A decent sized crowd is expected as many of the AFC supporters are long-time supporters of the historic ‘town’ club and it promises to be a very good game as the Rams look to make it four pre-season wins in a row.

TEAM NEWS:
With Chris Willcock’s shock departure for Workington on Thursday afternoon, it has rather thrown the Rams’ pre-season programme up in the air just three weeks out from our first league game of the season.

Club Secretary Tony Cunningham stated that there were still no players officially ‘signed on’ so the team for the game on Saturday will continue to be made up of ‘trialists’ although many of the players who have featured in the last few weeks have delivered and will now be focusing their attention on impressing the new manage Lee Donafee, who was appointed on Friday morning. It is never an ideal situation to lose your manager so close to the start of the season but it is hoped that the team, who have played will in pre-season, will remain intact and move forward ahead of the big league kick off on August 14. With Donafee in charge – he was Willcock’s assistant – he should be able to maintain the momentum built up over the last few weeks.