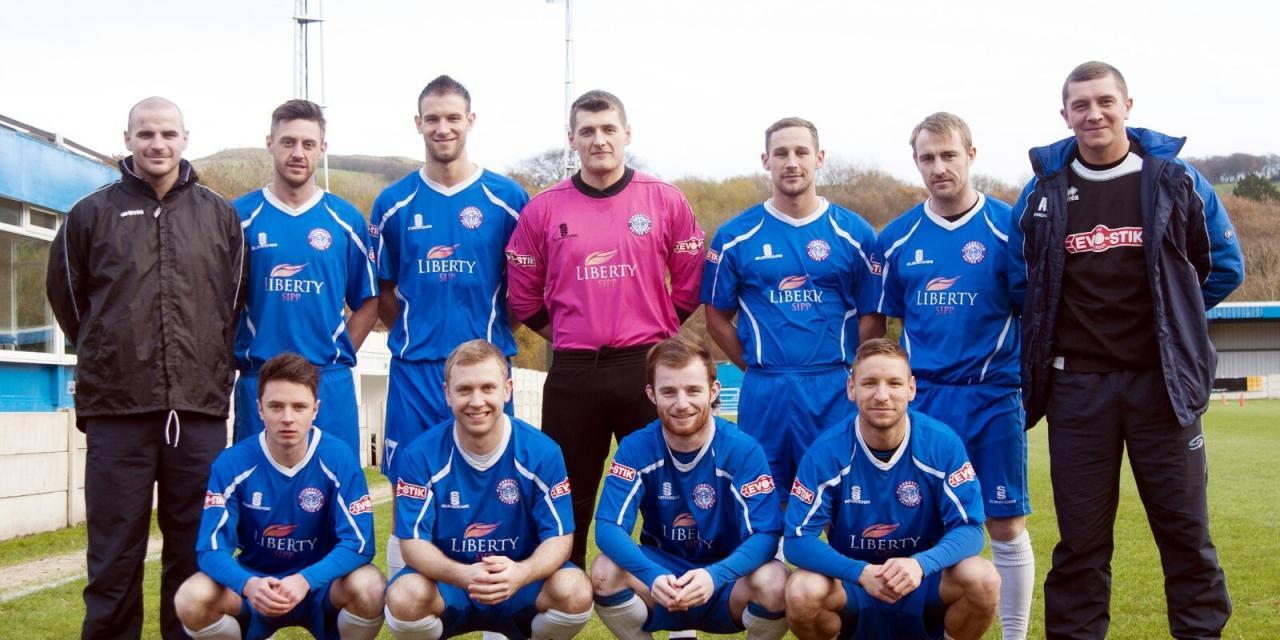 Seven years ago, in November 2013, Ramsbottom United achieved a feat that very few clubs at non-league level could – they fielded a full XI players who made over 100 appearances for the club in a 7-1 win over Burscough in the Northern Premier League, as highlighted on the official Ramsbottom United website today.

Here is Tony Cunningham’s article about the record:-

Loyalty amongst players at any level of football appears to be a thing of the past, and especially so in the non-league game.

How refreshing, then, to report on one club which could field an entire team of players who have all completed over 100 appearances for the side.

That side is Ramsbottom United of the Evo-Stik League Division One North.

Joint-player-managers, Bernard Morley and Anthony Johnson were appointed by Chairman Harry Williams in the summer of 2009, after a number of indifferent seasons in the North West Counties League.

Their tenure began with a 5-0 away defeat at Newcastle Town, which hardly augured well. Little did they know that Town were to embark on a 30 game unbeaten run as they raced to the title that season.

From that soul-destroying start, the new management duo put a side together that climbed the table and eventually finished in fourth position.

The following campaign was even more successful as they clinched the runners-up spot.

Only one side gained promotion, however, and for their third season, they targeted top spot and automatic promotion to the Evo-Stik League. After another highly entertaining nine months, the title was won, and amongst great celebrations at the newly-named Harry Williams Riverside Stadium, Ramsbottom United reached the highest point in their 46 year history.

The first season at the new level provided yet more entertainment for the ever-growing band of supporters in the town. With one minute of the last game of the season remaining, (away to Champions Skelmersdale United), the Rams looked like clinching a play-off spot. A late, late goal knocked them down to sixth, and agonisingly they missed out on the end-of-season lottery.

Anthony and Bernard are now into their fifth season in charge, and having enjoyed some cup success, now aim to catch up on missed League fixtures, as they once again target a place in the play-offs.

Throughout their reign, a number of players have stayed for the ride. Indeed, they have been a major part of the success story, as not only has the camaraderie kept them at the stadium, but the entertaining and expansive style of football has been another reason.

Now the Rams have a full line-up of eleven players who have all notched up 100 or more games for the side.

Completing the line-up are competitive defender Danny Warrender with 108 appearances (none from the bench) and midfielder Grant Spencer 101 (88 + 13).

On the bench, and fast approaching the magical three figure number are towering, but currently injured defender Ian Flannery 93 (90 + 3) and influential midfielder Gary Stopforth with 87 (86 + 1), and both could finish the season also passing the 100 mark (Stopforth did but Flannery didn’t play again)

How refreshing, in an age when players seem prepared to move for an extra fiver, to see such an example of loyalty from so many players, to both the club and their managers.